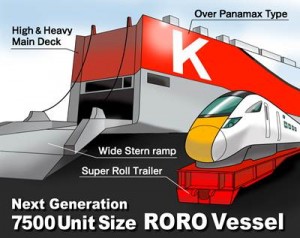 Global shipping line, K Line, has begun a direct service between Japan and the UK, which will employ the company’s 7,500 unit ro-ro vessels to move project cargo volumes (namely rail equipment) between the port of Tokuyama-Kudamatsu and Teesport.

K Line signed a contract in May this year with Vantec HTS Forwarding to transport Hitachi rail cars for the UK’s Intercity Express Programme (IEP), which seeks to replace the existing InterCity 125 train fleet being on routes in the country. The new trains are being manufactured by Hitachi at its Kasado plant in Japan.

A spokesperson for K Line told Automotive Logistics that a total of 790 rail cars for the IEP will be transported over the next few years and the majority will be booked with K Line ro-ro vessels.

“Depending on booking requirement by the shipper, 5 to 18 rail cars will be loaded per vessel on almost monthly basis,” said the spokesperson.

According to PD Ports, which owns Teesport, the K Line vessels will be the largest of their kind to arrive at the port, at a length of just under 200m and more than 75,216 gwt. K Line has ordered ten such vessels, which it said would give the company increased car carrying capacity of 20% as well as much more space for high and heavy cargo, including construction machinery and the project cargo being brought to Teesport.

The company also said the route between Japan and the UK would allow exporters of project cargoes to connect directly from Teesport with K Line’s global network.

“We are pleased to announce this new service to Teesport,” said a spokesperson for K Line. “The port's excellent infrastructure and its proximity to important North East markets makes it the perfect choice for our business and we are very much looking forward to working with PD Ports on this service.”

K Line’s announcement follows a similar contract in January this year when Höegh Autoliners vessel – Höegh London – delivered a rail carriage from Kobe in Japan to the port of Tyne in the UK for onward delivery to the Hitachi Rail Europe plant in County Durham, UK.