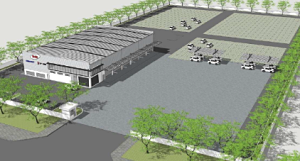 The K Line-Gemadept Logistics Company (KGL), as the JV has been called, has secured a 20,000 sq.m vehicle processing facility within an industrial park near the Saigon Premier Container Terminal, where K Line’s pure car carriers will deliver the vehicles.

A contract has already been secured with an unnamed Japanese vehicle manufacturer, with services already underway for car storage, application of vehicle registrations and customs clearance.

The JV also plans to provide pre-delivery inspections and installation of parts such as DVD systems and canopies, as well as repair and washing services, from January next year.

KGL claims to be the first company to provide 'total' auto logistics for finished vehicles imported into Vietnam.

NYK said the new service, which replaces a once-a-month service calling at the port of Cai Lan, would “attempt to meet the demand for the transportation of finished cars to Vietnam” which it described as “a country experiencing strong economic growth”.