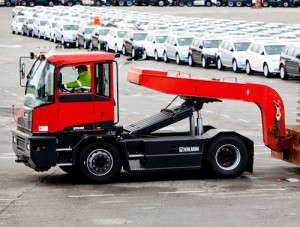 Cargotec’s cargo handling division, Kalmar, is supplying the new ro-ro terminal being developed at the Australian port of Melbourne with 12 pieces of cargo handling equipment, which will be used when the terminal goes into operation. The first phase of that operation will see a new 185,000-sq.m facility north of the current Webb Dock West car terminal, due to be completed early 2016. Phase two will be the incorporation of the current automotive terminal at the south end of Webb Dock West from January 1st, 2018.

The terminal has been designed, constructed and will ultimately be operated by the newly formed Melbourne International RoRo and Automotive Terminal (Mirrat) with which Kalmar has signed a contract. Mirrat is a wholly owned Australian subsidiary of Wallenius Wilhelmsen Terminals Holding, which won the tender to develop the terminal last year.

Michael Wahab, general manager, Mobile Equipment, Kalmar Australia said, "We are delighted to be awarded the order and to be recognised as a provider of clean and environmentally sustainable solutions to the Australian port industry."

Jed Smith, head of commercial and stakeholder management at Mirrat, said the company was committed to sustainable low impact operations, adding that Kalmar's ability to provide EU Stage IV/ EPATier 4 Final engines on a number of the machines was helping it achieve that goal.

“Our procurement decision was based on several factors; reliability, operational flexibility and environment factors and Kalmar represented the best balances of these elements," he said.