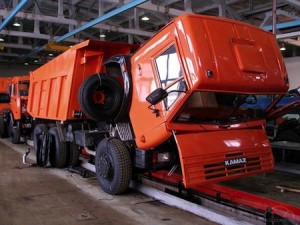 Russia’s largest truck manufacturer Kamaz is planning to launch CKD assembly in Venezuela in the second half of this year. According to Russia’s ambassador in Karakas, Vladimir Zaemsky, the issue is under discussion at the inter-government level and is already close to final agreement. Russian authorities are currently engaged in the negotiations with Venezuela’s Ministry of Commerce, which is expected to provide the license for Kamaz to launch CKD production. In addition, the project includes the launch of chassis production for local brand buses.

“Several Venezuelan states have purchased equipment from Kamaz and it suites them, so with the growing demand the Russian vehicle maker [along with the launching of CKD production] may also consider the possibility of increasing exports from other production sites," said Zaemsky.

Kamaz confirmed the plan but did not specify the estimated amount of investment or the planned production capacity of the assembly, though total investment in the project could reach around $30-40m and according to sources inside Kamaz, the current plans include production of about 500 trucks per year with the prospect of doubling this figure.

The CKD facility is expected to have its own logistic centre and output will include export to neighboring countries in Latin America alongside domestic supply. The localization will allow Kamaz to gain foothold also in the markets of Ecuador and Colombia, which have free trade zone agreement with Venezuela.

"Kamaz is focusing on strengthening its position in new and developing markets for the company,” said a source at Kamaz. “We opened a factory in Ethiopia, [and have] actively increased supplies to Indonesia and other countries in the Asia-Pacific region.”

So far demand for Kamaz products in Latin America has been covered low export volumes and by a small production site in Chile said the source. "However, this market is very attractive to us,” he added, estimating that output in Venezuela could quadruple what the company expects to sell in the African market over the next few years and reach upwards of 800 trucks.

“At the same time it is very important to confirm whether our company will get approval for output to be purchased by state companies and agencies,” said the source. “This is a socialist country and a large part of the demand will depend on state orders."

Kamaz has development plans for the coming years that include a gradual increase of the level of car sales in foreign markers. In 2013, the company sold 5,700 vehicles outside Russia and aims to double that figure by 2020.