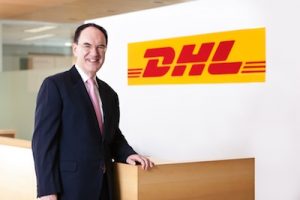 Freight services provider, DHL Global Forwarding, has appointed Charles Kaufmann as CEO for North Asia. Kaufmann (pictured) was most recently senior vice president, operations and value added services for Asia Pacific and he will continue to head this part of the business alongside his duties as CEO.

"Covering a range of economies from primary industry producers to highly sophisticated technology and services markets, North Asia demands highly nuanced approaches to trade and logistics,” said Leung. “Charles is an experienced leader with a proven track record representing DHL in North Asia. With his in-depth knowledge of the region, we are confident that he will be able to lead the next wave of growth for us," Kelvin added.

According to Leung, North Asia's exports have become a major engine of growth for the global economy, including exports from both South Korea and Taiwan, which have hit all-time highs in 2014, driven by key industries such as automotive and consumer electronics. It is those industries that demand safe, timely and industry-unique logistics solutions to stay competitive according to Leung.

Kaufmann was appointed CEO for Japan and Korea in 2006, before becoming the chief operating officer for North Asia Pacific in 2011. According to the company he managed air freight operations, implemented cost-efficient purchasing and pricing policies to achieve strong year-on-year revenue growth and set new standards of operational excellence across the 21 countries he was responsible for. In 2012, Kaufmann became head of air freight and value added services in DHL Global Forwarding Asia Pacific where he strengthened freight forwarding activities and the multimodal network in the region.

"Freight is a thriving business in North Asia and DHL Global Forwarding is very committed to the development of this sector in countries we operate in,” said Kaufmann. “North Asia has enormous growth potential and we will see business flourish in the years to come. I am very excited to pave the way for DHL to reach higher peaks and lead a passionate team that is devoted to expanding our operations in the North Asia global forwarding industry.”