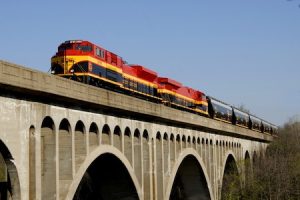 North American rail provider Kansas City Southern has increased its revenues in the second quarter of 2014 by 12% based on the same period last year, to a record $650m, helped by a 25% increase in business from the automotive sector.

“Looking ahead, KCS’ long-term growth story remains very much intact with the recent announcements of additional automotive plants in Mexico and the growth of our energy franchise with the announcement of the crude oil terminal in Port Arthur, Texas,” said KCS’ president and CEO, David Starling. “Energy and automotive, along with cross-border intermodal, Lázaro Cárdenas expansion and a host of other system-wide opportunities, position KCS very well for business growth over the next several years.”

As reported earlier this year KCS’s strongest demand for finished vehicle logistics services is coming from the Celaya area in Mexico, where Honda’s new plant is located. KCS is focusing efforts on balanced programmes for finished vehicles shipped in AutoMax equipment to and from Lázaro Cárdenas. These wagons carry northbound shipments to domestic destinations in Mexico where they unload before being repositioned to another loading point within Mexico and reloaded southbound to Lázaro Cárdenas.

KCS is investing in capacity expansion projects, such as a line of road infrastructure upgrades along its international corridor and the Caltzontzin district, north of Lázaro Cárdenas. This includes a new 3,000-metre siding at Cranell, Texas, centralised traffic control on the Laredo and Brownsville subdivisions, and siding extensions on the Beaumont subdivision and the Tula and Caltzontzin districts.

Across all business sectors revenue growth in Q2 was led by a 33% increase on the same period last year in agriculture and minerals. After the 25% growth in automotive business, intermodal, and industrial and consumer products were also strong, growing by 14% and 10% respectively, according to the company’s figures. Chemical and petroleum revenue grew by 6%, and energy sector revenue declined by 5%, primarily due to a decline in utility coal shipments.