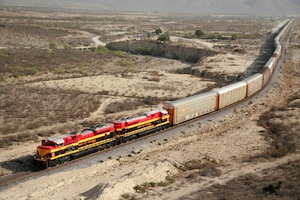 North American rail provider, Kansas City Southern (KCS), has seen a 7% rise in revenue from its services for the finished vehicle sector in the third quarter, and said it was looking for greater opportunities in 2014 from new vehicle plants opening in Mexico.

Revenue generated from its automotive business rose to $51.4m in Q3 (2012 Q3: $48.2m), though automotive carloads remained flat compared with the same period last year at 28,000. Overall revenues for the company increased 8% to $622m.

“The 7% revenue increase in the third quarter was from finished vehicles only but we have seen an increase in our intermodal parts, plastics and steel shipments related to automotive production as well,” said a spokesperson for KCS.

He added that the company expected rail to continue as a key means of transport for the automotive industry as production in the region continued to grow, and that KCS would have the capacity to handle it. The company has made recent investments in new Automax railcars and will supplement them according to demand, something that will be supported by long term contracts according to the company.

More specifically, the company pointed to upcoming plant openings in Mexico as a potential source of additional business. KCS provides routes between the US and Mexico via Laredo.

“Nissan plans to open a plant in December of this year, while Honda and Mazda plan to open new plants in the first quarter of 2014,” said KCS’ spokesperson. “Additionally, Audi plans to open a plant during 2016. Over time, these four new plants will provide capacity to produce approximately 750,000 units. Mexico is expected to produce about 3m units in 2013, so the additional capacity from these new plants will be a significant opportunity for KCS.”