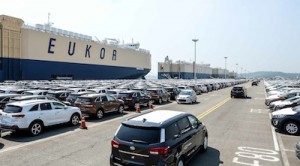 This month South Korean carmaker Kia Motors expects to hit the milestone of exporting 15m vehicles from the country. It started exporting in 1975 when the first ten Brisa pick up trucks were sent to Qatar. Exports to overseas markets now account for 70% of domestic production, which in 2014 hit 1.71m units. Between January and May this year accumulated exports reached 503,655.

The Rio model is out in front in terms of total exports, with 2,230,000 units, followed by the Sportage, Picanto and Sorento.

Kia reported that the rate of exports from its domestic market is growing. It has taken just four years and three months to export the last 5m vehicles. According to the carmaker that is one year and nine months less than it took the company to grow its export volume from 5m to 10m vehicles.

In terms of the regional destination over the last 40 years, 6.03m cars have been shipped to North America over the past 40 years, 3.35m to Europe and 2.52m to the Middle East & Africa. In addition, 1.71m to Central & South America (including the Caribbean) and 1.29m to Asia Pacific.

Between January and May this year the carmaker’s top three export countries are the US (186,419) Canada (32,869) and Saudi Arabia (21,878). In terms of region, following North America, the Middle East and Africa accounted for 96,188 units over that period, while Western Europe took almost 81,800.

Currently Eukor Car Carriers is handling 60% of the total export volume, while Hyundai Glovis handles the other 40%.

“We have been making rapid expansion in our overseas production capacity, and as such, we are establishing optimal shipment plans that best suit each region’s market characteristics in order to maintain the current positive momentum of our exports from Korea-based factories,” a spokesperson told Automotive Logistics.

Read an extensive 16 page report on South Korea in the next edition of Finished Vehicle Logistics magazine (July-September).