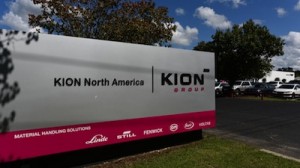 Linde Material Handling North America is changing its name to Kion North America Corporation as of January 2015. The company said the change would allow it to better align itself with its European parent company, The Kion Group, and serve as a platform for its North American growth strategy. The Kion Group is one of the world's largest suppliers of forklift trucks, warehouse technology and associated services, and includes six brands: Linde, Still, Fenwick, OM Still, Baoli and Voltas.

"We will even further strengthen our Linde Brand with additional product offerings while at the same time grow the Still brand through future developments," said Brian Butler, president and CEO. "As we align ourselves with the global development and manufacturing strategy of the Kion Group, Kion North America will become a significant contributor to the development and manufacturing of products specifically for the North American market."

The company is aiming to double its market share in the US over the next few years from the current 2% to between 4%-5%.

Kion operates a production plant in Summerville, South Carolina, with an annual capacity of more than 10,000 trucks, and has a nationwide sales and service network with around 100 dealers.

The company held a commemorative ribbon cutting ceremony at its Summerville headquarters last week. Guests included members of the Linde, Still and Kion boards along with several representatives from the Kion group and government officials.

"The continued development and growth of our organisation in North America is extremely important for the Kion Group,” said Gordon Riske, the company’s CEO. “It is one of the key elements of our Strategy 2020, which we are pursuing with the aim of significantly extending our global reach. We want to move away from being a niche provider and become a significant market player in North America under the Kion name."