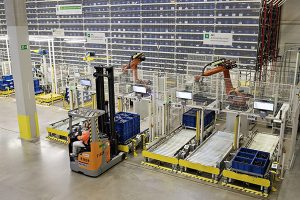 Škoda Auto is deploying autonomous robots at its small parts warehouse at Kvasiny in the Czech Republic to work alongside its employees and make parts sorting and delivery more efficient. The use of the robots is part of the carmaker’s efforts to digitalise production processes under its 2025 Strategy, which embraces industry 4.0 technology.

“In our company, humans and robots successfully work every day hand in hand,” said Michael Oeljeklaus, Škoda Auto board member for production and logistics.

According to the VW-owned carmaker, driverless transport vehicles are used first to put the parts into storage. The vehicles take the delivered crates, identify their shape and contents using a camera and scanner, and transport them into the warehouse

Two collaborative robots (cobots) and two Škoda employees then sort small parts into racks before placing the order in production at the plant. More robots take the parts from the small load carriers (SLCs) and load them onto autonomous floor conveyors, which travel autonomously to one of two assembly lines just-in-sequence.

The transport robots are 1.40 metres long and 0.90 metres wide, and depending on the version, can carry loads of 1,300-2,000 kg; they have a speed of 7.2 km/h). In addition to a battery for their electric drive, the robots are also fitted with a computer, safety scanners, speakers, a blue safety light and other warning lights.

“First and foremost, the equipment provides workplace safety,” said a spokesperson for the company. “If the equipment detects people or obstacles in its path, it stops.”

The carmaker revealed that a further 11 transport robots in Kvasiny are guided via laser technology and orientate themselves towards reflective dots attached along the conveyor path.

Škoda currently manufactures the Superb, Kodiaq and Karoq models at Kvasiny and from 2019, the Superb with plug-in hybrid drivetrain will also be made there. Covering 1,750 sq.m, the small parts warehouse offers space for almost 45,000 SLCs and has recently been expanded in order to reach a capacity of more than 300,000 units per year.

The OEM also expanded its parts centre for aftermarket distribution sales in Mladá Boleslav this year, where an automated goods-to-person fulfilment option is operated, known as the parts-to-picker process. To find out more about that, turn to page 50 of the current issue of Automotive Logistics magazine.