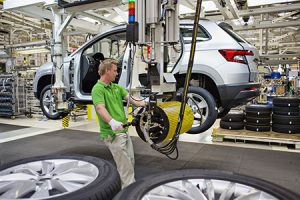 Škoda Auto has opened an automated small parts warehouse at its Kvasiny plant in the Czech Republic.

The company said the €8m ($9.3m) investment was one of the biggest logistics projects in its modern history, adding that it would improve efficiency and make its on-site logistics processes more flexible.

“With the new automated warehouse for small-sized parts opened in Kvasiny, we continue our journey to automating the process of shelving and picking small-size parts at Škoda Auto,” said board member for production logistics, Michael Oeljeklaus.

The company is also planning to open a similar warehouse at its major Mladá Boleslav facility next year.

Annual cost savings of €1m are expected to from the Kvasiny plant project.

Previously, the material in KLT was stored in individual conventional warehouses. An increase of production and broadening of the model portfolio meant that this capacity was not sufficient.

"The saving lies mainly in abolishing of the additional costs for renting other warehousing sites and in transportation costs from different locations," a Škoda spokesperson told Automotive Logistics.

"Other savings will manifest themselves from efficiency improvements and automation of logistical processes of logistics operators."

In the new facility, which can store 45,000 small-load carriers, small parts are stored in a central location, with automated putaway and picking processes. Parts are transported from the warehouse to the assembly line using a just-in-sequence operation.

The Kvasiny plant produces, among other models, the Škoda Kodiaq and Škoda Superb. The company has also just started production of the new Škoda Karoq (pictured). The plant is expected to gradually grow to reach an annual capacity of 295,000 vehicles.

Škoda's Logistics division has been using a semiautomatic shelf warehouse of GLT (larger) pallets since 2012 with automatic transportation through a tunnel between buildings in the factory. This is the first time that Škoda Auto is using the high level of automation for KLT warehousing.

Other VW Group companies have also embraced warehouse automation. Audi, for example, already uses automated parts warehouses to feed its assembly floors at the Ingolstadt and Neckarsulm plants in Germany.