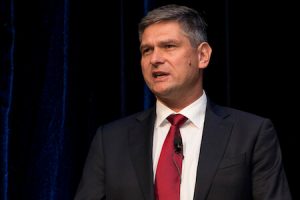 Peter Koltai (pictured) has taken up a new role at Audi this month as head of transport logistics, based in Germany. He replaces Heiko Schulz, who has resigned under a retirement arrangement.

In his new position, Koltai is responsible for driving Audi Group’s entire transport logistics strategy, including inbound material and outbound vehicle transport. He runs a team of engineers with purchasing and controlling tasks as well as planning and operational responsibilities.

Koltai moves to the new job from Mexico, where for the last three years he has been director of production control and logistics, overseeing the set-up and start of production at the carmaker’s plant in San José Chiapa. The plant, which started production at the end of 2016, makes the Q5 exclusively and exports around 95% of its output worldwide.

Audi said it would be announcing Koltai’s replacement as director of production control and logistics at Audi México at a later date.

In an interview with Finished Vehicle Logistics magazine earlier this year, Koltai said that whoever his successor was would need to have a focus on maintaining team spirit – something he described as crucial for the future of the business in Mexico.

“We need to make sure the team spirit does not disappear and getting together the German and Mexican cultures is a major factor,” he said.

Koltai’s involvement in the Mexico project dates back even further than the last three years, however: he was previously Project Mexico director of logistics at Audi for almost two years before moving to the country.

Prior to that, Koltai was director of material operations at Audi, based in Ingolstadt. He first joined Audi in October 1996 in logistics planning.

The San José Chiapa facility is the first factory the German carmaker has set up outside Europe and also the first it is exclusively managing overseas (its China operations being joint ventures).