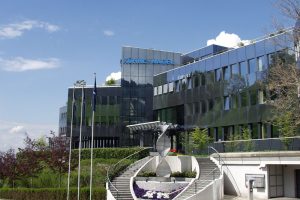 The company’s CEO, Dr Detlef Trefzger, said there had been some “remarkable improvements” in KN’s contract logistics and overland activity in the period. Recent gains specific to the automotive industry have included new or extended contracts with BMW, Jaguar Land Rover and Michelin. The company declined this week to disclose figures relating to the contribution of its activities in industry verticals, however.

Nevertheless, the gains in overland and contract logistics have helped to counter what Trefzger described as “the ongoing pressure on margins in sea freight and air freight”, alongside the logistics provider’s “growth-oriented business strategy [and] efficient cost management”.

In air freight, volume growth accelerated in the second quarter, leaving KN with an 18% increase in tonnage in the first half of 2017, driven by strong demand for “industry-specific air freight solutions”, including new business predominantly from the pharmaceutical, aerospace and perishables industries.

KN has expanded its activity in the perishables sector recently with the purchase of Commodity Forwarders, a leading air freight forwarder of perishables products in the USA, and Trillvane, one of the largest perishables specialists in Kenya.

During the first six months of 2017, net turnover in the overland part of the business increased by 3.3% and gross profit by 3.5%, compared to last year. This was driven by higher volumes for groupage, full truckload and intermodal shipments mainly in Europe and the USA, and by strong orders for industry-specific services.

In contract logistics, KN said there was a substantial increase in new business and an expansion of services to existing customers. Compared to the previous year, an additional 540,000 sq.m of warehousing and logistics space were added and gross profit in this operation increased by 6.6%.

As an example, the company said this month that it had expanded its Control Centre in Wroclaw, Poland, to improve supply chain performance and flexibility for customers in the automotive, industrial and consumer sectors.