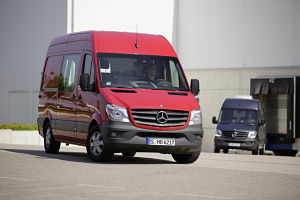 The logistics provider will be taking care of all production logistics for the plant, including receiving, inventory management and delivery of parts to the assembly line, body shop and returnable container centre, according to a spokesperson for KN.

The company says it will be using automated guided vehicles (AGVs) and smart glasses for order picking in a modern logistics centre to support the operation.

Work on the new $500m Sprinter plant began in July 2016 with a ground-breaking ceremony attended by the governor of South Carolina, Nikki Haley, and the head of Mercedes-Benz Vans, Volker Mornhinweg.

Currently, Mercedes-Benz Vans supplies semi-knockdown (SKD) Sprinter van kits to the US from Germany. The kits are made at its German plants in Düsseldorf and Ludwigsfelde.

The vehicle maker has been importing SKDs since 2006 for the larger Sprinter models and added SKDs of the Metris (Vito) mid-sized van in 2015.

Daimler and KN already have a 15 year-old relationship, as part of which the logistics company provides services for Daimler and Mercedes-Benz facilities in Hamburg and Bremen in Germany, Sebes in Romania, Kecskernet in Hungary, Beijing in China, Monterrey in Mexico and Memphis in the US.

KN already operates three production logistics operations like the upcoming one in Charleston for the German-headquartered carmaker, as well as further similar operations for several other automotive customers worldwide.