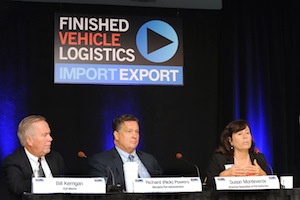 With new vehicle sales and production in North America still running at record levels, the region’s vehicle-handling ports are running out of room. Larger vessels, sometimes arriving in bunches, are putting more pressure on terminals and yard space. Land for expansion, meanwhile, is hotly contested because port authorities have competing claims on its use, whether with the much larger container trade, or with real estate developers keen to invest in waterfront property.

With federal infrastructure grants limited in scope and slow to materialise, and container ports attracting the bigger portion of the funding for better hinterland connections, there is a real need for focused public-private partnerships to improve the velocity of throughput for ro-ro and finished vehicles.

At this week's Finished Vehicle Logistics Import Export conference in Baltimore, Maryland, leading figures from the port authorities and terminal operators looked at where investment was coming from and where it needed to go to better manage car volumes.

Bill Kerrigan, vice-president of logistics at the auto division of terminal operator SSA Marine, put the case clearly: there is not a lot of room left for ro-ro in the US ports and Mexico is moving at a snail's pace to put the port infrastructure in place needed right now. While the vehicle logistics industry has spoken for years about building inland mixing centres, multi-storey garages for storage and increased terminal space, the reality is that none are likely to happen in the time required. The only answer is to improve road and rail connections for ro-ro volumes and speed up their movements in and out of the ports to avoid congestion and 'vessel bunching' outside the ports. That is going to need investment and more scrutiny in its allocation.

“Greater velocity is better for everyone,” said Kerrigan, pointing to the urgent need for operators to more closely study the entire process mapping the movement of finished vehicles from factory to dealer. “We as an industry need to separate out the different segments and look at the numbers to see what is happening,” he said. Mapping that process also required a historical perspective to gauge seasonal demands.

Kerrigan added that there needed to be a common EDI or XML messaging platform shared across all of the supply chain providers involved in each stage of the vehicle delivery process, as many continue to email spreadsheets, requiring processors to create a bill of lading manually.

Speakers also suggested that there was a pressing need for vessel sharing agreements between the maritime operators and a greater adoption of RFID technology on a national scale.

The question is, who will fund it all? Private investment will have to be stepped up because federal sources are lacking, even after the passing of the ‘FAST’ act in the US late last year. Susan Monteverde, vice-president of government relations at the American Association of Port Authorities (AAPA), admitted that federal funds were not keeping pace with demand, in part because ports have to vie for funding from the government spend with highways and air transport.

“With infrastructure we are competing with highways – the 'big kahuna' in federal spending,” she said. “Some of those highway dollars could go our way.”

Getting a piece of the pie is getting critical. The US Department of Transport has allocated $600m to 52 port-related projects which will be allocated over eight rounds as part of its TIGER programme of discretionary grants but demand for the funds continues to far exceed what is available. Given that it takes $60m to regularly dredge a port, those funds are quickly swallowed up before the additional outlay in supporting infrastructure.

Added to this is the fact that the Federal Government is not holding up its side of the bargain, according to Monteverde. She used the example of the port of Miami having to pay for its own channel deepening.

“They couldn't wait 20 years to deepen, they wanted to get it done and get it done quickly,” she said. “Infrastructure money that might go to other things traditionally is now paying for the traditional things that Federal Government used to pay for, such as deepening or some of the road and rail connections in and out of the sea ports.”

The good news is that port authorities and private operators are stepping up spending. In a survey of its 140 members across North America, the AAPA found that the investment required came to $155 billion over the next five years, three times what it was when members were last surveyed five years ago.

What ports are left with is a need for a clearer and more specific focus on where exactly that funding needs to go to improve connectivity. Kerrigan cited a study into connectivity indicators port-to-port made by the Journal of Shipping and Trade over 148 ports across the European Union. That study identified which ports were best for which particular traffic or route.

“We need to focus on the best connectivity and not try to be everything at once,” he concluded.

Alternatively, the Customs and Border Protection (CBP) could distribute its Harbor Maintenance Fee (HMF), effectively a duty levied on all imports into the US to help maintain ports. The fee is intended to require those who benefit from maintenance of US ports and harbours to share the cost of the maintenance. Rick Powers, director of marketing at the Maryland Port Administration, called for exactly that, saying it was an easy and fast solution to funding.

“The harbour maintenance tax is paid by everyone who has cargo going across the piers and it hasn't all been distributed to the ports,” he pointed out. “I think it was 50%. The rest is going to a general fund and now that won't be available until 2025. Start distributing that money to the ports now and it would be a huge benefit.”

According to Monteverde, the current distribution of the HMR is around 69%, and is supposed to shift to 100% over the next 10 years.