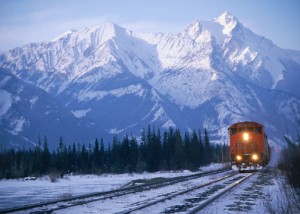 Figures just published by the Association of American Railroads (AAR) for the week ending November 22nd reveal that carloads of motor vehicles and parts shipped in Mexico are up 15.4% compared to the same week last year, with year-to-date results showing an 11% increase over the same period in 2013.

Almost 195,000 wagon loads of vehicles and parts have been moved so far this year in the country with an average of almost 4,150 moved a week. Figures for the latest week reported show that almost 4,600 wagons of finished vehicles and parts were shipped.

This compares to declines in the US and Canada for the week ending November 22nd, the most pronounced being in Canada, with a drop of almost 20%, though Canada still moved almost 4,800 wagon loads in the week. The US moved more than 18,000 carloads by comparison in the week, a marginal decline of 0.2%.

Weather was the main reason for the sudden drop in the figures for Canada. According to a spokesperson for Canadian National Railway (CN), one of the countries leading rail providers, a massive snowfall of more than seven foot in Buffalo, New York state, closed Ford’s stamping plant which in turn meant there was a cut in supply to the carmaker’s Oakville assembly plant in Canada, which is served by CN.

“Ford’s Buffalo stamping plan supplies Ford Oakville assembly with 20 freight cars per day of parts,” the spokesperson told Automotive Logistics. “The Buffalo plant was shut down by snow between November 19th and 22nd. As a result of this and some other factors, there were no finished vehicle shipments out of Oakville assembly for 10 days. When everything is running smoothly, CN loads 70 carloads per day of finished vehicles at Oakville.”

Ford is understood to be planning shifts on Saturday December 6th, 13th and 20th to make up for lost vehicle assembly at Oakville, and CN will be working closely with the carmaker to expedite shipments to market according to the spokesperson.

The combined figures resulted in North American rail traffic in vehicles and parts dropping by 2.1% for the week but increasing 2.2% for the year so far. Just over 27,400 wagons were moved in the week, against a year-to-date figure of 1.2m.