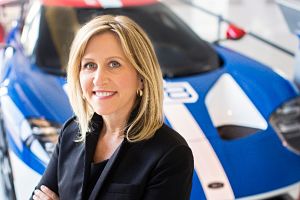 Lisa Drake (pictured) will replace Birgit Behrendt from January 1st as head of global powertrain purchasing and global purchasing operations at Ford, as part of a number of executive changes announced by the carmaker this week.

Thai-Tang and Nair were appointed to their own positions earlier this year.

Before purchasing, Drake held various positions in product development over nearly 20 years. In 2004, she led the F-150 product and launch team during the construction of the state-of-the-art Dearborn Truck Plant at the Ford Rouge Center. Her other notable positions included chief engineer, Lincoln MKC; assistant chief engineer, F-Series Super Duty; and program manager roles for Explorer and Expedition.

Meanwhile, Behrendt will take on a newly created position at Ford of Europe, leading joint ventures, alliances and commercial affairs.

Since joining Ford in 1978, she has held various positions within purchasing and several global leadership roles. She most recently served as vice-president global powertrain purchasing and global purchasing operations in Dearborn, Michigan.

Also among the changes was the appointment of Dale Wishnousky to lead manufacturing at Ford of Europe, succeeding Linda Cash who will now lead quality and new model launch operations, following Bennie Fowler’s retirement. Wishnousky previously served as director of the global manufacturing business office.

Jim Hackett, Ford’s president and CEO, said: “The changes we are announcing today will further align resources and improve efficiencies throughout our global markets and operations. At the same time, I want to recognise the truly significant contributions of the senior leaders departing from Ford and thank them for their many years of service.”

Earlier this year, Ford named Jim Hackett as its new president and CEO, replacing Mark Fields, who retired after 28 years with the company.