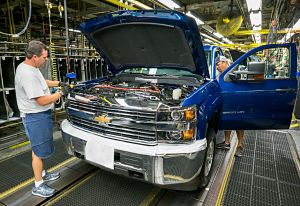 Lear, which did not disclose the size of the investment, will begin construction of the 14,865 sq.m facility this autumn at the former site of the Buick City administration building. Completion is expected in early 2018.

General Motors produces the Chevrolet Silverado and GMC Sierra cars at its Flint plant, which is its oldest operating facility, having opened in 1947.

“Since 2009, GM has invested more than $2.8 billion in Flint and we’re proud to see suppliers like Lear also commit to business in Flint,” said Tom McMillen, executive director of interiors and safety at GM global purchasing and supply chain.

“Lear has been a trusted partner of GM throughout its 100-years of business and earned GM’s coveted Supplier of the Year designation 16 times. We look forward to continuing this relationship in our next generation of vehicles produced in Flint,” added McMillen.

Two years ago, GM announced plans to invest $877m to build a new body shop for the assembly plant at Flint, locating it closer to the Flint Metal Center, which supplies sheet metal and other parts used in the pickup trucks built at the plant.

Ray Scott, executive vice president and president of seating operations at Lear said: “This expansion of capacity reflects the positive outlook we have for our business as well as the favourable economic climate in Michigan, and will contribute to the revitalisation of Flint.”

General Motors is one of Lear’s major customers, contributing 20.9% to the component maker’s revenues in 2016, according to the latest annual report. Only Ford is higher with a 21% contribution.

At the end of 2016, the company, headquartered in Southfield, Michigan, had 243 facilities globally, including 82 just-in-time facilities.