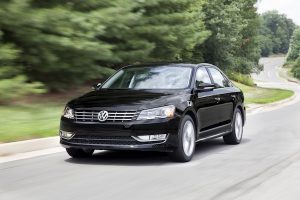 A national consumer group in the US has urged Donald Trump not to allow Volkswagen (VW) to “dump its mountainous inventory” of bought-back vehicles on to local market, three years on from a diesel emissions’ testing scandal.

“Flooding our streets with heavily discounted or below-cost vehicles could lead to a tremendous disruption of our automotive market and be especially harmful to US automakers,” said Matthew Kandrach, president of Consumer Action for a Strong Economy (Case).

The German car manufacturer dismissed such fears, saying it would only sell stored vehicles by balancing supply and demand to avoid a surplus.

An industry source told Automotive Logistics that if VW flooded the market with cheap, discounted cars, it would risk damaging its own residual value.

The issue has resurfaced after Case aired an advert on US TV channels to argue its points during Angela Merkel’s visit at the end of April.

A year earlier VW reached a US court settlement to pay a $2.8 billion criminal fine and $1.5 billion in civil penalties after pleading guilty to three felonies related to a decade-long conspiracy to undermine US pollution standards. VW had admitted in September 2015 that it equipped more than half a million US cars with software to cheat diesel emissions tests.

The settlement included an option for customers to sell their vehicles equipped with TDI engines back to VW which, Case said, has led to a glut of cars being maintained and stored in the US while the company waits to sell them.

Should it sell them en masse, as well as being harmful to US automakers, it would also “punish foreign automakers who not only played by the rules, but also invested heavily in building US factories and hiring tens of thousands of American workers,” said Kandrach. “We are all for consumers getting a great deal, but the situation with Volkswagen is very concerning.”

Case’s vice-president Gerard Scimeca noted the domestic car market is sluggish, and most analysts are predicting fewer sales this year. “With gas prices and interest rates heading higher, a glut of bargain-discounted cars on the market could exacerbate the situation,” he said.

In response, VW said it has bought back, or modified, more than 450,000 affected vehicles to date through the TDI settlement programme.

“In accordance with our court-approved agreements, vehicles that have been bought back are stored at facilities on an interim basis and routinely maintained in a manner to ensure their long-term operability and quality, so that they may lawfully be returned to commerce once they have received an approved emissions modification,” said the company.

“As these vehicles are released back into the market, we are consciously balancing supply and demand through our network of VW dealerships, so as not to create a surplus.”

The carmaker added that vehicles not modified because of their age, condition or other reasons would be responsibly recycled.

Meanwhile, the company appears to be putting the scandal behind it, at least in the marketplace. Volkswagen of America reported sales of 28,794 new vehicles in April, an increase of 4.5% on the year-ago month, with 112,746 new vehicles delivered in the first four months of 2018, a year-on-year rise of 8.6%.

“We are very pleased with our rebuilding efforts: slow and steady,” a company spokeswoman told Automotive Logistics.