Location key to Volvo’s latest plant in the US 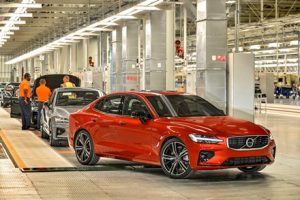 Sweden’s Volvo Cars has held a plant opening for its first US manufacturing base, near Charleston, South Carolina.

The company invested around $1.1 billion (€950m) in the plant, which has an annual production capacity of 150,000 cars a year. The new S60 mid-size sports sedan will be the first model to roll off the assembly lines from the fourth quarter of this year, with the next-generation XC90 large premium SUV to follow in 2021.

The factory will employ approximately 1,500 workers by the end of this year, with plans to increase that to around 4,000.

Logistics played a part in the investment decision from the outset when the company chose to build in Berkley County partly because of the location’s access to international ports, including nearby Charleston, and good infrastructure. The OEM also highlighted the area’s well-trained workforce, good investment environment and experience in the high-tech manufacturing sector.

More recently, Michel Torreborre, vice-president of Volvo’s supply chain management, told Automotive Logistics that the carmaker has ambitions for the Charleston factory to help double sales in the US as well as exporting the S60 globally.

“We have designed the plant to have a direct rail connection that will allow us to take in goods and ship cars,” he said. It will also have a vehicle processing centre onsite to handle cars for US distribution.

That will lead to the company bringing in more imports through Charleston, though it will continue to use other US east coast ports.

The Charleston plant follows Volvo’s global manufacturing strategy of “build where you sell.”

Connecting plants with rail networks and the ports to meet the immediate and longer term needs of the North American automotive industry will be a focus for discussion at this year’s FVL Import Export summit in Baltimore, which takes place in August