​Logistics growth in China is more than simple expansion

While China’s automotive and logistics growth continues to expand at double digit rates, there is now more stability, a greater degree of quality in the services offered, and greater diversity in the areas of growth in response to demand. Margins for providers remain low, however, and may make further service improvements difficult.

Speaking at the opening session of the Automotive Logistics China conference in Beijing, Cai Jin, vice president of the China Federation of Logistics and Purchasing (CFLP), said these factors were indicators of a positive trend for the economy and were likely to continue as industrial restructuring encouraged productivity.

[His session and those of the rest of principal sessions are available on video as the conference was streamed live globally outside China for the first time.] 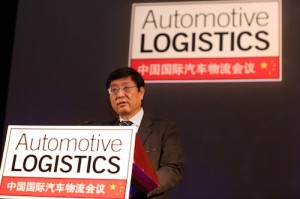 The growth of automotive industry in China, with the total domestic number vehicles now at 126m units, has been a driver for the country’s economy, as well as a major influence on the development of its infrastructure, noted Cai.

Total logistics revenue grew 9.2% revenue year-on-year in 2013, according to figures from China’s National Development and Reform Commission (NDRC). The added value share in GDP reached over 6%, and was more than 14% in the service industry.

Private sector logistics growth has been particularly strong, according to the vice-president of NDRC's Economic Operations Bureau, Wang Hiumin. What she called ‘innovative business’ has increased, with areas such as express logistics showing rapid growth and last year accounting for the delivery of 9.19 billion items, a rise of 25%.

Margins remain lower than across industry in general, however, at around around 4% last year. That margin has been low because it is hard to raise rates, even as costs go up, and Wang said that the sector needed innovation in management to get higher profit margin, especially with competition more aggressive.

Following the policy shift announced last year by the Chinese government, Wang said that the answer was to rely more on market forces.

“We should rack our brains to make the market forces play a decisive role in the allocation of resources,” she said. “The government should only provide the role of enabling the right business environment and level the playing field.”

Three key issues to address with this approach were the cost of road tolls, the introduction of co-delivery to reduce the cost of last mile logistics, and the establishment of a good division of labour.

Another trend noted by speakers at this week’s conference was the transformation of the industry from one in which basic services were fragmented into one typified by accelerating integration in those services, including freight forwarding, express logistics and transport. Dai Dingyi, vice chief of the experts committee at CFLP, said that certain freight forwarding companies were standing out because of asset size and a new focus on specific industry standards following a spate of acquisitions.

There is a marked increase in investment and evidence shown in backlogged orders to supply equipment for the logistics industry, including modulised equipment or multimodal transport.

“The Chinese logistics market will continue to grow,” concluded Dengyi, “but the opportunities offered by structural adjustment are greater than simple expansion.”

Video recordings of the principal sessions from both days of the Automotive Logistics China conference are available on the conference programme page here.