WWL Vehicle Services Americas, which provides vehicle processing and logistics services to the North American market, has awarded top performing suppliers at its annual Carrier Conference, held in Tennessee. The awards were held on behalf of Nissan North America. 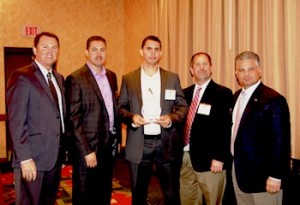 Awards were presented to carriers based on a series of criteria such as safety and damage statistics, efficiency, timeliness and quality handling.

In all there were six companies recognised with awards.

Car hauler Tribeca Automotive took two awards, one for Rail Ramp Carrier of the Year and one for Transportation Partner of the Year (pictured).

Union Pacific took the award once again this year in the category Rail Carrier of the Year. The rail provider’s network serves customers in the finished vehicle and aftermarket vehicle sectors, with direct access to five assembly plants, and operating or accessing more than 40 vehicle distribution centres.

Finally, the Short Sea Carrier of the Year went to Horizon Lines.