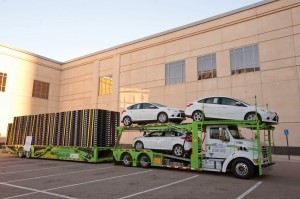 French vehicle trailer manufacturer, Lohr Industries, has signed a partnership agreement with Convertible Trailer Manufacturers Worldwide (CTM WW) to produce trailer equipment that will be able to handle both finished vehicles and a range of other general cross-industry freight, including containerised parts.

CTM WW’s vehicle transporter designs mean trailers can convert in a number of configurations to accommodate vehicles and high & heavy equipment, along with containerised cargo that can be carried in its own AutoBox containers.

“What we are bringing to the equation is that once we have developed the resources for engineering, we will bring our knowledge of all the car carrier markets around the world,” said Belton. The company has a global manufacturing presence with seven facilities and some of the world’s leading transport providers as its customers.

Prototypes of the equipment are expected between June and July this year, followed by pilot projects over the summer. Speaking at the event in Bonn, Bill Pawluk, CEO of CTM WW, confirmed that a number of OEMs would be invited, and he called for other companies to get involved.

Pawluk maintains that the automotive logistics industry is spending $50 billion a year worldwide because of inefficient transport, with 42% of car carrier journeys logged with empty trailers – the highest empty factor in the transport industry. Filling those empty miles is the answer to the problem, according to Pawluk.

“I’m committed to this concept because I had my own transportation company in Canada,” said Pawluk. “We always came back rom the US empty and I wanted to do something about it. I did it and it worked. I reduced my empty miles from 47% down to less than 5%.”

That said, Pawluk acknowledged that making the move to the concept takes time and confidence in an industry hung up on legacies.

“It takes time to get people to gain the confidence to step into this field,” said Pawluk. “We are just used to doing the same thing over and over again. It takes time for people to actually see it working.”

It will also take legislative change in the US to see the concept fully utilised there, though as CTM WW has shown with demonstration cross border runs between Oakville in 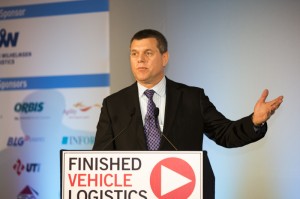 Canada to Detroit, the trailers can move outbound vehicles and bring back inbound parts.

In the US we have a legislation issue, which is being addressed, but it has to go before Congress to get changed,” said Pawluk. “That has been a roadblock in the US, so I moved over to Europe and verified that there were no legislative barriers.”

In other news, Lohr has announced it is restructuring its business in North America which operates under the Delavan brand. It is pulling out of its joint venture with Miller Industries and moving main production of its equipment for North American markets to its facility in Mexico, with additional services supplied from an existing facility in Atlanta, Georgia.