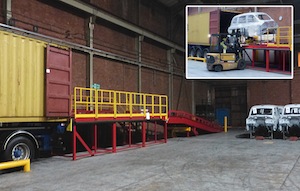 Thorworld Industries, which specialises in loading and unloading equipment, has installed a bespoke platform and ramp loading bay system at London Taxi Company’s manufacturing facility in Coventry, UK. The company said the system has brought greater efficiency and flexibility in the delivery of containerised parts from China.

Chinese vehicle maker Geely owns the London Taxi Company and parts made at the company’s facility in Shanghai are shipped to the UK facility for final assembly. Around 18 containers a week are shipped between China and the UK. However, these containers were not compatible with the loading bay layout in Coventry, according to the company, meaning that they had to be unloaded on arrival at the port of Felixstowe and reloaded onto curtain-sided trailers for onward delivery to the UK plant.

“We knew that doubling-up on the loading stage at Felixstowe was creating unnecessary expense and inconvenience,” said Richard Wood, supply chain manager at The London Taxi Company.  “These issues needed to be addressed, so we researched the available options online to source a suitable solution.  That solution was Thorworld.”

The system installed includes a dock plate with removable forklift handles, a platform with an 8,000kg capacity and a 10,000kg access ramp, in addition to access steps, handrails, bumpers and bollards.

“The designs created matched our expectations completely, and the integrated platform and ramp system has already shown its worth beyond a doubt,” confirmed Wood. “The team on-site really enjoys using the kit and find that efficiency levels have increased significantly. Furthermore, as we no longer have to pay fees at the port to transfer container contents, the ramp will pay for itself within several months.”

John Meale, managing director of Thorworld Industries, said the company was pleased that London Taxi had chosen its equipment. “We understand that the apparatus is being considered ‘a showpiece’ in the loading area, and hope that The London Taxi Company’s satisfaction, as well as the beneficial effect the equipment is having on its manufacturing processes, continues for many years to come,” he said.