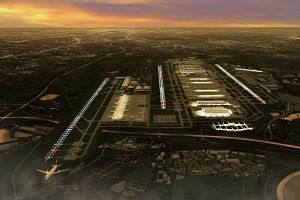 The UK government has approved a third runway at Heathrow but the decision has been met with both praise and hostility, suggesting that there are still a number of hurdles to clear before construction actually gets underway.

Along with the handling of 75m passengers a year, the airport is also the country’s biggest cargo handling point, accounting for over a quarter of export goods by value and 29% of the UK’s trade outside the EU.

Describing the decision as "the right choice for Britain", Chris Welsh, the Freight Transport Association's director of global and European policy said: "In line with the prime minister’s Conservative Party Conference speech in which she talked about the Government’s vision of ‘a truly global Britain’, we need to look to markets outside Europe, in particular to emerging markets in Asia, South America and the Indian subcontinent.

"Freight accounts for around 40% of the UK’s imports and exports by value, and high-end manufacturing industries such as pharmaceuticals, automotive manufacturing, mobile telephones and retail are dependent on Heathrow.”

The initial fallout from the approval included the resignation by UK MP Zac Goldsmith, who campaigned against the proposal, while foreign secretary Boris Johnson described the plan as “undeliverable”. In addition, several local councils affected by the expansion have pledged to launch legal action.

The £16.5 billion expansion could be ready by 2026 if all goes to plan. It was first proposed in a government white paper 13 years ago.

Industry applauded the decision to expand the airport, with Robert Keen, director general of the British International Freight Association (BIFA), saying: “Today’s news appears to be the beginning of the end of years of procrastination over the expansion of UK aviation capacity. If that is the case, it is long overdue good news for our 1,500 member companies who have been dismayed over the ongoing delay on such a huge issue.”

Paul Drechsler, president of business body the CBI, said: “Pressing ahead with key infrastructure projects like this will provide not only a welcome economic stimulus, but will show the world that we are well and truly open for business as we negotiate our exit from the EU.”

Gatwick airport, the country’s second largest, had proposed another runway of its own to the south of London and expressed disappointment in the decision to go with Heathrow, however.

“We are disappointed as we do not believe this is the right answer for Britain. Gatwick has put forward a credible, financeable and deliverable plan for expansion,” said the airport’s chief executive, Stewart Wingate.

A public consultation will now take place on the effects of the third runway at Heathrow. MPs are likely to vote on the final decision in late 2017 or early 2018.

BIFA’s Keen suggested these milestones may not be reached easily, however.

“Whilst the UK transport secretary, Chris Grayling, has hinted at an expedited planning procedure with no reopening of high-level arguments, the inevitable legal challenges and the convoluted parliamentary and planning processes that are also likely lead me to doubt that any expansion will be completed by the time that UK aviation capacity is predicted to run out in 2025.

“I hope I am proved wrong, but I won’t be booking a ticket for the opening ceremony just yet," added Keen.