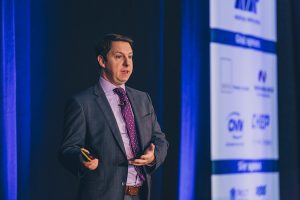 The automotive industry in the UK is in the shadow of looming disruption brought about not just by the uncertainties of Brexit but a host of other issues that will be made more problematic if the country leaves Europe without a deal on March 29 next year. Given that the logistics sector in the UK is worth more than £93 billion to the UK economy, the priority on remaining agile and competitive is clear but the fact that a ‘no-deal’ Brexit would instantly remove 750 existing trade agreements with the EU is making a lot of people anxious for some sort of deal.

However, speakers in the opening sessions of today's Automotive Logistics UK summit in Silverstone were focused on how to change existing supply chain business models to make the best use of emerging digital technology as a means to tackle the disruption ahead and remain competitive.

Nissan's plant in Sunderland is a case in point and the company is looking at more localised shared platform sourcing, along the lines of what it has achieved with its Qashqai model, which was designed for production in the UK and has a high percentage of local content. Martin Corner, vice-president of supply chain management for Nissan Europe (pictured), said that made the supply chain easier to manage, adding that more generally across the Renault-Nissan-Mitsubishi Alliance the company would be looking for high percentage localised content, subject to analysis of the total landed cost of the end product. Corner is also head of production control for the Alliance in Europe.

The Alliance is investing in digital to move supply chain management from being simply cost-efficient to making gains in value creation. That means changing an organisational mindset that has traditionally considered logistics as the poor relative to product research and development, according to Corner. The Alliance is now focused on making its supply chain more agile using industry 4.0 technology. That includes making kaizen-style efficiency gains across its vehicle compounds and parts centres, but Corner said the big picture gains were to be made by analysing customer behaviour and synchronising production and distribution with it.

“Inventory and storage is a big cash drain and we have to look at having the right type of inventory on hand and reducing the amount of it we have,” he said.

To do that, the Alliance is using artificial intelligence to provide accurate forecasts on inventory based on real demand and developing more small-scale shadow systems to target specific demands on an ad hoc basis.

But while the technology exists, Corner said it was important to change the OEM business model and stop operating in silos competing with each other for services and capacity. Ultimately this causes waste and inefficiency, he said.

Another major concern for the industry as Brexit approaches is the impact on labour. Peter Ward, chief executive of the UK Warehousing Association, pointed out that one in 12 people in the UK were involved with logistics but there was an imminent labour shortage in the UK warehousing sector as Eastern European workers returned home because it was no longer viable for them to remain in the job. Foreign workers have been critical to the warehousing sector, according to Ward, and the exodus has led to wage inflation in the sector as companies pay more just to keep the staff they have. Rates have increased by around 40% according to Ward.

“This will have a huge effect on business and the cost impact will cascade through to the cost of logistics overall,” he said.

Training the staff that remained was important in retaining a talented workforce – something of a priority for Mercedes-Benz, according to its CEO of parts logistics UK, Juan Manuel Santiago Mendez. “We have efficient processes in our supply chain but we have to keep the whole workforce permanently trained,” he said, adding that this involved changing attitudes from the top to the bottom of the organisation. Santiago said it was important to convey the idea that automotive logistics was not the same business it was five years ago and that it certainly won't be the same next year.

The general feeling at this week's conference was summed up by Olivier Thouard, customs and tax director at transport and logistics provider, Gefco.

“The automotive industry has to prepare for a hard Brexit now,” he said. “[Companies] must analyse and define risks and actions. We hope for a transition period but you have to be prepared. Brexit is six months away and time is running out.”