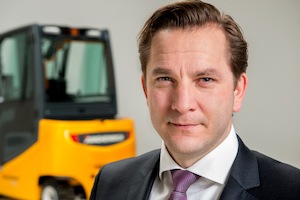 Warehouse equipment provider Jungheinrich UK has announced the appointment of Jan Lorenz as its new managing director. He replaces Hans-Herbert Schultz and takes up the new role on January 1, 2014.

Schultz, who has been in the role for seven years, has taken over responsibility for sales in North-West Europe and will be based in Germany.

Lorenz has been with the Jungheinrich Group for ten years, with the last six and a half spent leading its marketing and sales operation. Prior to this he worked for Jungheinrich in the US and developed a dealer network on the East Coast and in eastern Canada, later becoming the director of Direct Sales.

"I am delighted to be joining Jungheinrich UK and look forward to taking up the challenge of building on Hans-Herbertís excellent work and further strengthening our market position and profitability," said Lorenz.