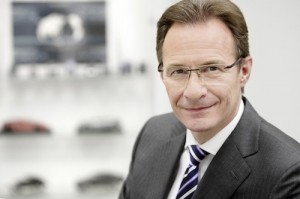 Michael Macht (left) has quit his post as Volkswagen’s head of group production with immediate effect and will be replaced on an interim basis by Thomas Ulbrich, currently board member responsible for production and logistics at the Volkswagen Passenger Cars unit following his appointment in April this year.

Macht’s departure follows press reports that Volkswagen has been having manufacturing problems, particularly at its flagship Wolfsburg plant, following the implementation of its ‘MQB’ modular platform, a highly complex production process that is intended to save billions of euros in costs by building a wider variety of vehicles and engine types on one platform.

Shortly before Macht’s departure, Reuters reported manufacturing delays and complications related to the MQB platform for Golf production in Wolfsburg. The German magazine Der Spiegel also reported that there had been problems with new equipment installed at the plant.

Asked for further details about Macht’s sudden departure, a spokesperson for the Volkswagen Group said the company could provide no further details. He said that a permanent successor would be announced subject to approval by the VW supervisory board.

"Michael Macht has taken the Volkswagen production system further forward. We would like to thank him for his achievements," said Prof. Dr. Martin Winterkorn, chairman of the Board of Management of Volkswagen AG. “The Group's production network has expanded strongly under Macht's leadership, and the annual production volume has increased from 6.7m to almost 10m vehicles.”

Thomas Ulbrich, Macht’s interim replacement, is a veteran logistics executive, having recently been the head of production and logistics at Shanghai Volkswagen, one of the carmaker’s joint ventures in China. He has also led plant and logistics operations at a number of Volkswagen Group plants.

Macht was in charge of production and logistics at Porsche for more than a decade and was instrumental in helping to integrate Porsche into the VW Group. He was replaced as head of the Porsche brand by Matthias Mueller and moved to headquarters in Wolfsburg to take over responsibility for VW Group production in 2010.

"The Volkswagen Group and its employees are unique and I am deeply grateful to have been part of this company,” Macht said in a statement. “I am convinced the Group will continue its successful and sustainable growth of recent years."

From the archives: read Automotive Logistics’ feature interview with Michael Macht from May 2008, when he was head of production and logistics at Porsche.