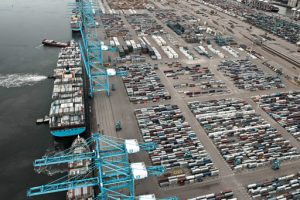 AP Moller-Maersk has resumed taking online bookings and said operations at all of the ports it has terminals at were now running “close to normal” after Tuesday’s cyber-attack.

Earlier this week, Maersk, one of the world’s biggest ocean carriers with 600 vessels, said the ransomware attack had brought down IT systems across multiple sites around the world and also hit its terminal division, APM Terminals, at a number of ports.

“Following the cyber-attack on Tuesday, AP Moller-Maersk is cautiously progressing towards technical recovery to ensure the issue remains contained,” said the company in a statement. “It is too early to give a timeline for normal business to be restored.”

“Maersk Line is loading cargo as booked and handling cargo in transit is close to normal,” it stated.

Security experts said malicious software called Petya and a similar strain of the virus called GoldenEye were at the heart of the cyber-attack.

Operations at certain ports, including those in India, had to be handled manually with ships diverted to alternative terminals that had escaped infection.

While business is underway as usual at the ports of Algeciras, Tangier, Callao Lima, Mumbai, Itajai and Buenos Aires, the company said it was still working on expanding services at Pier 400 in Los Angeles, Port Elizabeth in New Jersey and Maasvlakte II in Rotterdam.

TNT Express, a subsidiary of global courier company FedEx, was also hit by the cyber-attack.

“While TNT Express operations and communications systems have been disrupted, no data breach is known to have occurred. The operations of all other FedEx companies are unaffected and services are being provided under normal terms and conditions,” said FedEx in a statement on Wednesday.

It went on to say that TNT Express domestic country and regional network services were largely operational, but slowed.

“We are also experiencing delays in TNT Express inter-continental services at this time. We are offering a full range of FedEx Express services as alternatives,” it added.