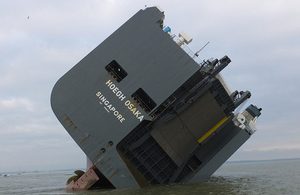 The UK’s Marine Accident Investigation Branch (MAIB) has said stability issues were the root cause of the Höegh Osaka listing and grounding off the port of Southampton in January last year.

In the incident – which left a number of high-value vehicles badly damaged – the car carrier developed a significant starboard list on leaving the port which increased to more than 40°, leading to a loss of steerage and propulsion. The vessel subsequently drifted aground on Bramble Bank. As the vessel listed, a cargo shift resulted in breaches to the hull and consequent flooding.

“The MAIB’s investigation found that Höegh Osaka’s stability did not meet the minimum international requirements for ships proceeding to sea,” Steve Clinch, the chief inspector of marine accidents, stated in the report. “The cargo loading plan had not been adjusted for a change to the ship’s usual journey pattern and the number of vehicles due to be loaded according to the pre-stowage plan was significantly different from that of the final tally.”

According to the report, the estimated weight of the cargo was less than the actual weight and the assumed distribution of ballast was incorrect. This resulted in the vessel leaving Southampton port with a higher centre of gravity than normal.

The vessel was carrying around 1,400 vehicles and 100 pieces of earthmoving equipment. The upper vehicle decks were full, while the lower vehicle decks were lightly loaded. In addition, the vessel was low on bunker fuel oil, which is stored towards the bottom of the ship, and the ship’s overall vertical centre of gravity (VCG) was relatively high.

The Höegh Osaka moved vehicles between Europe and the Middle East. In Europe the vessel usually called at Bremerhaven, Hamburg, then Southampton, with fuel taken on board in Hamburg. However, due to the New Year holidays, the cycle was changed and Southampton was the first European port visited. The cargo loading plan, however, was not adjusted.

“This accident is a stark reminder of what can happen when shortcuts are taken in the interest of expediency,” the report said. “It is therefore imperative that working practices adopted by the car carrier industry ensure that there is always sufficient time and that accurate data is available on completion of cargo operations to enable the stability of such vessels to be properly calculated before departure.”

Ingar Skiaker, CEO of Höegh Autoliners, thanked the MAIB for its investigation and the comprehensive report it had published.

"Höegh Osaka’s unfortunate incident was caused by a series of circumstances that independently would not have been critical, but ultimately caused the vessel to develop a severe list and ground on the Bramble Bank,” said Skiaker. Since the incident, Höegh has reinforced the need for adherence to procedures to all its staff and expanded training courses to ensure that the lessons learned were shared across the company, he added.

"Our senior technical team will now look very carefully at the report’s detailed findings to determine additional lessons for our future operations, but it is reassuring to see that most of the recommendations made in the report have already been incorporated in our procedures,” said Skiaker.