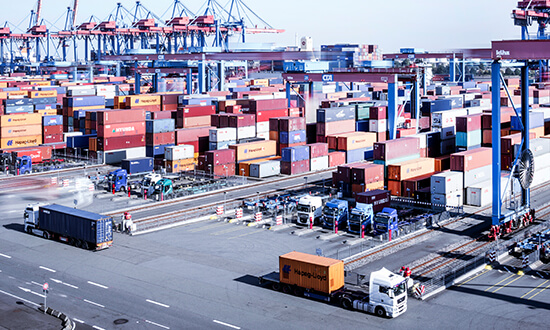 Germany’s MAN Truck & Bus has begun working with Hamburg port operator HHLA to trial autonomous driving technology on a 70km stretch of the A7 motorway and a container terminal at the port (pictured).

The Hamburg TruckPilot project will analyse and validate the requirements for customers in the real world and integrate autonomously driven trucks into the automatic container handling process, said HHLA. Future standards for methodology and implementation will be defined during the trials.

“As with other projects, the focus here is on integrating the system into concrete workflows for a future user,” said Frederik Zohm, management board member for research and development at MAN Truck & Bus. “Together with HHLA, we will generate important insights for the further development of the technology into a system that is ready for the customer.”

The three-phase project will see two prototype autonomous trucks entering the A7 at the Soltau-Ost junction, south of Hamburg, before travelling up the motorway and autonomously handling discharging and loading within the Altenwerder container terminal.

The preparatory phase defining the project’s technical framework has started and is due to be completed by year-end. The testing phase is planned to run for 18 months from January, including technical development of the system at MAN’s testing grounds in Munich. How final trial operations are conducted between July and December 2020 will be determined by the outcome of the first two phases.

“A trained safety driver will always be present in the vehicle during this phase to monitor the automation systems. If required, they will intervene and become an active driver,” said HHLA.

The companies suggest automated driving will provide relief and support for truck drivers. Assuming the legal fundamentals are in place, a driver could process freight documents during fully automated motorway travel or simply take a rest, the HHLA added.

“Other potential benefits include increasing efficiency through automated defensive driving. This significantly reduces fuel consumption and can also positively influence the general flow of traffic,” the company added.

HHLA and MAN plan to present the Hamburg TruckPilot project when the city hosts the ITS (Intelligent Transport Systems) World Congress in October 2021.

The new trial with HHLA extends MAN’s work in the field of driverless vehicles. Last June, MAN began began a platooning trial on a 145km route including the A9 motorway in southern Germany in partnership with DB Schenker, the Hochschule Frensius University of Applied Sciences and the German federal government.