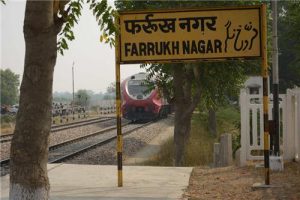 Indian Railways has started work on a vehicle loading facility at Farrukhnagar, near Gurgaon (now Gurugram), close to Maruti Suzuki’s plant in Manesar.

As reported in the Times of India, railways minister Suresh Prabhu said the aim of the facility was to transport up to 25% of output from the Maruti plant by rail.

Maruti also has a facility in Gurugram and Indian Railways already has a car-loading bay near there, which currently handles traffic from both of the OEM’s plants. However, that facility is limited to an annual capacity of 40,000 units, forcing the OEM to distribute the majority of its 1.5m annual output by road, in keeping with the vast majority of finished vehicles in India.

The new loading facility is designed to tackle this, however, and should help Indian Railways grow its freight and cargo business. It also promises to give Maruti Suzuki a faster and more reliable transport option for national distribution.

As reported last week, Indian Railways is also dedicating an Auto Express rail service out of Gurugram to Nidvanda that will cut delivery times from 70 to 57 hours.

Inland waterwaysMaruti Suzuki is also planning to move vehicles using inland waterways, according to reports in the Indian press.

According to The Economic Times, the carmaker recently signed an agreement with the Inland Waterways Authority of India (IWAI) that could reduce its overall logistics costs. The report said IWAI had already deployed a vessel at Varanasi to transport vehicles. It is understood vehicles will be moved between there and Kolkata along the river Ganga on India’s National Waterway 1.

India has 5,200km of rivers and 4,000km of canals that can carry freight and passenger vessels and currently has plans to develop dedicated freight corridors in the east and west of the country.

Rail is regarded as the best option for timely, long-haul volume shipments in India but trucks still cover most of these, despite their high turnaround times and despite being more appropriate for last-mile moves. However, what India really needs is a balanced multimodal network combining rail, road, inland waterways and coastal shipping.

Speaking at the last Automotive Logistics India conference, Shailendra Singh, general manager of logistics at Maruti Suzuki, said there needed to be a more accurately integrated use of assets that removed the inefficiencies currently resulting from fragmented use of different transport modes in the country.

Without this approach, and a focus on delivering the logical strengths of each mode, the growth and prosperity of the automotive industry would be compromised, said Singh, adding that OEMs, logistics providers and government all needed to collaborate to make a multimodal system work.