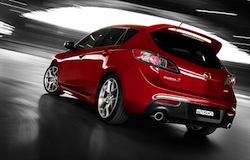 Mazda has established a national sales company in South Africa that it said will enable independent control of the import and sale of its vehicles to the country, as well as provide customer services. The new company – Mazda South Africa – will be based in Johannesburg and involves a 200m rand investment ($19m).

Currently Mazda vehicles are distributed there by Ford Motor Company of South Africa (FMCSA) but Mazda’s new unit will take over responsibility from July next year.

FMCSA will continue selling and servicing Mazda products during the transition period. Mazda's BT-50 pickup truck will continue to be produced at Ford's Silverton Assembly Plant in South Africa.

Mazda South Africa will sell the new Mazda6 in addition to existing models. It will also introduce the Mazda3, which will go on sale in North America this autumn.

“With 600,000 vehicles sold per year, South Africa is the biggest automotive market on the African continent,” said Yuji Nakamine, Mazda's senior managing executive officer for Europe, Asia & Oceania, Middle East & Africa. “The establishment of a national sales company and introduction of more next-generation products will give the Mazda brand a much greater presence and contribute to the overall development of the South African market.”

Mazda has been selling vehicles in South Africa since 1963.