Mazda to use Trans Siberia Railway all year 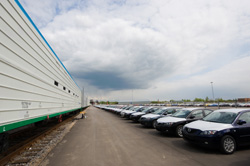 Mazda will be using the Trans-Siberian Railway route it started shipping vehicles on in 2008 for the entire year this year. The move follows studies the Japanese carmaker has made into the effect of weather conditions on the vehicles. It was the first carmaker to use the route for regular traffic and last year used it for 11 months.

The carmaker now brings 87% of the vehicles destined for Russia via rail from Zarubino (near Vladivostok) to Moscow, equal to 27,000 units. These include the Mazda2, Mazda3, Mazda5, Mazda6 and the Mazda CX-7. The only vehicles excluded are the BT-50 and Mazda MX-5 because the BT-50 is produced in Thailand, and volume for MX-5 is too small for Russia, being under 100 units, to conduct tests for the TSR. They join the remaining 13% of vehicles Mazda that are transported by ocean via the ports of Kotka in Finland and St Petersburg in Russia.
Each train takes an average of 300 vehicles in block cars provided by Russian provider RailTransAuto. The vehicles are shipped to Vladivostok from Mazda’s Hiroshima and Hofu plants in Japan and moved to train for the 12-day journey over 9,300km. They are delivered to Mikhnevo terminal in Moscow, the largest rail terminal for car transshipment in the Russian Federation.
Once in Russia the company works with Major Auto Trans for inland distribution. The carmaker is also currently contemplating the establishment of a vehicle storage facility.
“At the moment, we are considering a possibility of setting-up a vehicle storage facility in either Novosibirsk or Ekaterinburg,” said a spokesperson for Mazda Motor Rus. “This will help us decrease the cost of delivery, shorten the delivery time and decrease damages.”
The company has also made some preliminary studies into the possible set up of a production facility in Russia’s Far East region as part of a wider study into developments in Brazil, Russia and India.
Mazda sold nearly 25,000 vehicles in Russia last year led by the Mazda3 (9,976) and Mazda6 (9,127).