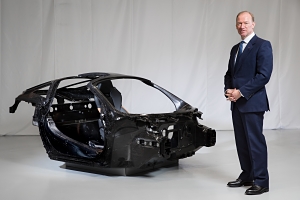 McLaren Automotive has announced the first details of its Composite Technology Centre, a £50m ($62.5m) investment in Sheffield, England, that will allow it to produce its own carbon fibre chassis by 2020.

The centre will be responsible for the development and manufacturing of the Monocell and Monocage carbon fibre chassis in future McLaren cars.

The decision to take research, development and production of the chassis in-house will provide McLaren with greater control, a spokesperson for the company told Automotive Logistics.

Since 2011, McLaren has imported the part from an unnamed supplier in Austria.

“In this way, we take control of the supply chain, quality and production processes,” said the spokesperson. “The announcement of the new McLaren Composites Technology Centre is an important step, with the first prototype chassis being delivered by the end of the year and full-scale production by 2020.”

The company has not built a car without a lightweight carbon fibre chassis since 1981. The latest Monocage will weigh only 90kg.

Insourcing the manufacture of the carbon fibre chassis will increase the average percentage (by value) of a McLaren car sourced in the UK by around 8%, from its current average of around 50%, depending on the model. It also gets around the potential problem of import tariffs on goods from mainland Europe as the UK leaves the EU.

The spokesperson said McLaren had “already started engaging with potential suppliers” of the material.

Formed through a partnership between McLaren Automotive, the University of Sheffield’s Advanced Manufacturing Research Centre (AMRC) and Sheffield City Council, the centre will create more than 200 jobs.

This next generation Monocell will be built using advanced automated manufacturing techniques developed in conjunction with AMRC.

AMRC executive dean, Keith Ridgway, said: “It is our ambition that supply chain companies will start to build factories here to supply the chassis plant.”

The McLaren Composites Technology Centre will be will be housed in a 7,000 sq.m building set over four acres near the AMRC campus.

Mike Flewitt (pictured), chief executive officer of McLaren Automotive, said: “We evaluated several options to achieve this objective but the opportunity created by the Advanced Manufacturing Research Centre at the University of Sheffield was compelling.

“At the AMRC, we will have access to some of the world’s finest composites and materials research capabilities.”

Last year marked the introduction of the company’s new business plan, Track22, which involves the investment of £1 billion (US$1.25 billion) in research and development to deliver 15 all-new cars or derivatives by the end of 2022, of which at least 50% will feature hybrid technology. The company also launched a second shift at the McLaren Production Centre during the year.