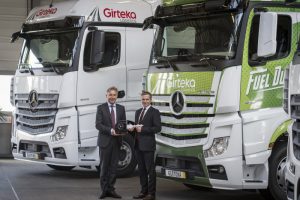 Stefan Buchner (left), head of Mercedes-Benz Trucks, hands over the symbolic key to Mindaugas Raila, chairman of Girteka Logistics, at the Mercedes-Benz Customer Center in Wörth.

Lithuanian transport and logistics provider Girteka Logistics has begun taking delivery of 1,000 Actros trucks from Mercedes-Benz to support its business in Europe, Scandinavia and the Commonwealth of Independent States (CIS). Announced earlier this year, the order was the biggest Mercedes-Benz Trucks had received from Eastern Europe. The value of the order was not disclosed.

Girteka has been handling spare parts distribution for Mercedes-Benz since 2012 along with its other business.

“In the year of our 20th anniversary we decided to modernise our fleet by 1,000 new Mercedes-Benz Actros – an important strategic decision for us,” said Mindaugas Raila, chairman of Girteka Logistics. “The new Actros convinces by its operating performance, safety equipment and reliability.”

Mercedes-Benz says it has cut average fuel consumption on the new generation Actros by 13% since its launch in 2011.

All the trucks for Girteka are equipped with the latest generation OM 471 Euro 6 engine and predictive powertrain control (PPC). They also feature Daimler’s FleetBoard telematics system to monitor fuel efficiency alongside other truck and driver performance characteristics.

The initial handover took place at Mercedes-Benz’s Wörth plant in Germany, where the new generation of Actros has been made since 2011. The full fleet will be delivered throughout 2016 at a rate of around 20 a week, according to a spokesperson for Girteka.

The logistics provider’s fleet currently consists of 2,900 trucks and 3,100 trailers.