Mercedes-Benz pushes ahead in Brazil despite downturn 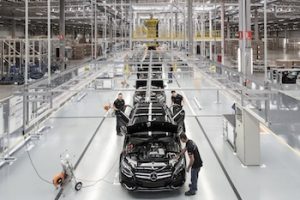 Mercedes-Benz has started production at a new 600m reais ($165m) plant at Iracemápolis in Brazil, about 170km north west of the capital São Paulo. The plant, which was officially opened last week, is making the C-Class Saloon and, from this summer, the GLA compact SUV.

The new plant follows the carmaker's rivals, which have also recently opened production sites in Brazil. In October 2014, BMW started assembly in Brazil in Araquari, while a year later Audi opened a plant in Curitiba in October 2015. Jaguar Land Rover is also set to open a plant in the country this year.

Luxury carmakers are adding assembly in Brazil despite the current condition of the the country's economy, which is in the midst of its worst recession since the 1930s. Last year, total passenger vehicles sales tumbled by around 25%, falling to 2.1m against 2.8m in 2014, according to figures from the National Association of Automotive Vehicle Manufacturers (Anfavea). Passenger car sales have dropped a further 27% in the first two months of this year compared to 2015, to 253,970 units.

However, during 2015, the premium market that Mercedes-Benz is targeting fared better, though this now looks like it too is changing for the worse.

Last year, Mercedes-Benz reported record passenger car sales of more than 17,000, a near-50% increase on the previous year, according to the company (17,500 according to Anfavea). Markus Schäfer, member of the divisional board of Mercedes-Benz Cars for manufacturing and supply chain management, said the company still believed in the long-term prospects of the passenger-car market in Brazil.

“With local production, we are strengthening our global competitiveness and will be closer to our Brazilian customers and their needs,” said Schäfer.

Mercedes-Benz said annual capacity at the plant was 20,000 vehicles and a spokesperson for the company suggested those vehicles would supply the domestic market.

“With the C-Class and the GLA we will produce two models, which are already best-sellers,” said the spokesperson, adding that the company would comply with all of the Inovar Auto requirements, which cover production, local purchasing and investments in engineering.

Inovar Auto is Brazil’s vehicle technology and supply chain incentive scheme, which provides tax breaks for suppliers who invest in technology associated with automotive production and operations in the country.

While Mercedes-Benz would not comment on the amount of local material it would use to assembly vehicles in Brazil other than meeting Inovar requirements, the low volume suggests that considerable content will be imported. Such imports will pose financial difficulties given the fall in the value of the Brazilian real. The euro, for example, has gained nearly 20% versus the real in the past year, increasing the cost of imports.

Mercedes-Benz projected capacity for Brazil is similar to plans by other luxury brands for relatively low assembly volume of around 20,000-30,000 units per year – a marked difference to plans by Audi, BMW and Mercedes-Benz to all add plants in Mexico with capacity of around 150,000 units or more. Mexico surpassed Brazil last year in the number of vehicles it produces.

Rollercoaster marketDespite the strength the premium market last year, IHS Automotive pointed to a weakening in the segment in first two months of this year. Moreover, it does not expect the Mercedes-Benz plant to reach its targeted 20,000-unit capacity, even in the long term, according to principal analyst Augusto Amorim.

Mercedes-Benz has been committed to production in the country for some time because of the Inovar Auto scheme, high tariffs on premium imports and the tax breaks on production within the country. While last year was bad for vehicle sales, Mercedes did well – as indicated by its 50% increase in sales. Other German premium brands, including Audi and BMW, also both registered gains, with Audi rising 40% compared to 2014 to 17,541, and BMW (including Mini) rises 4% to 17,850, according to Anfavea.

“In a way, the luxury market was holding better than the total market last year,” said Amorim. “However, January and February have been weak, even for the luxury brands.”

“Of course, it could be that [Mercedes] was transitioning from imported vehicles to locally built ones but we are starting to see weakness in the premium market as well,” said Amorim, adding that part of the problem for the carmaker was that neither model was new to the market.

In its analysis of the Brazilian light vehicle market published late last year, IHS said the rollercoaster nature of the market over the past decade was having an impact on its make-up.

Writing then, Amorim said Brazil's Inovar Auto scheme had had a significant impact on the production base, encouraging localisation of research and development as well as production. The scheme contributed to increasing production and investment in the country but has coincided with an economic slowdown and plunging consumer confidence that has now been felt even at the premium level.

The decline in the automotive market is expected to continue into 2017 according to IHS. With the change in economic circumstances, there has been a notable pullback in investment from other carmakers. Though recent years have seen new plants from FCA last year with a new Jeep plant, Hyundai, Nissan and Toyota, earlier plans have been cancelled or delayed. China's Chery, for example, has mothballed its planned plant in Brazil. Honda, which had planned to open a new plant in the country this year, has also pushed back its plans.