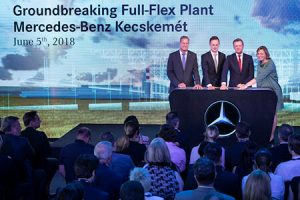 Germany’s Mercedes-Benz Cars has broken ground on a €1 billion ($1.18 billion) ‘full-flex' plant at Kecskemét in Hungary.

The full-flex concept – the model for all the OEM’s future car assembly lines – is designed to allow for flexible production of cars with a wide variety of body and drive variants, including electric and automated vehicles.

The new plant is being built next to the company’s existing one in Kecskemét, about 90km south of Budapest, which last year produced more than 190,000 compact vehicles. The first cars are expected to start rolling off the new production line at the start of the 2020s.

Within the factory, pick-by-light and pick-by-voice technology will both be used to transmit details of parts and quantities to order pickers via displays and earpieces, a company spokesman told Automotive Logistics. There will also be a digital interconnection covering areas such as materials flow and quality control. Tablets, handhelds, smartphones and smart watches will all be used to support the 2,500-plus employees in their daily work.

Inbound parts will be brought in by rail and truck and work is ongoing with local authorities over the development of local infrastructure, the spokesman said. Internal logistics would be outsourced in the same way as at the existing plant, he confirmed.

“Also, we are planning to set up a supplier park around the plant. As at other locations, it is important to us to locate strategic and long-term partners close to the plant and to improve the infrastructure,” he added.

“Our selection of suppliers is always based on four criteria: quality, cost, innovation and delivery reliability. All traditional and other suppliers still have every chance of being selected. Of course, geographic proximity plays an important role in today’s just-in-time/just-in-sequence production. This means that western European suppliers are also included.”

The full-flex factory will receive components from existing plants in the Mercedes-Benz production network, such as engines and transmissions from Germany, the spokesman said. The existing Kecskemét plant works with more than 30 suppliers registered in Hungary, he pointed out.

The plant will be designed with lean production in mind, aiming for an ideal layout with short distances and processing times for maximum efficiency, leading to “a common pulse rate” throughout the entire production process, he continued.

The capacity-adding plant consists of press, body-in-white and paint shops, and an assembly line. It has been designed to be CO2-neutral.

“In a full-flex plant, several vehicle architectures, from compact models to rear-wheel drive sedans and various drive forms including electric vehicles, can be flexibly produced on one line,” said Markus Schäfer, Mercedes-Benz Cars divisional board member responsible for manufacturing and supply chain.

The new Kecskemét plant is based on the planned ‘Factory 56’ at the company’s flagship Sindelfingen plant in Germany which will be highly digitalised, incorporating driverless transport systems and digital twin simulation, among other innovations.