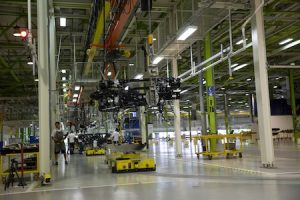 Mercedes-Benz has extended its contract with Ceva Logistics in Brazil covering inbound and aftermarket services for its Juiz de Fora assembly facility in Minais Gerais. The deal means a three-year extension to its existing contract with Ceva, which covers materials handling, line feeding and external warehousing.

However, the latest deal also includes two new agreements that will extend parts of the contract for three and five years respectively. Those parts of the deal will see Ceva provide interplant transport at the Juiz de Fora facility and also packaging services at the customer's parts distribution centre (PDC) at Campinas, São Paulo, which was formerly handled by another logistics provider.

Ceva is employing a further 280 people to cover the additional work.

The Juiz de Fora assembly plant makes the heavyweight Mercedes-Benz Actros and light-duty Accelo trucks for the Latin American market and for export. The company has just announced it expects to more than double its exports of trucks to the Middle East and North Africa during 2017.

“Mercedes-Benz is a market leader in the truck and bus segment in Brazil,” said Fábio Mendunekas, Ceva’s vice-president for business development in South America. “For Ceva it is a great honour to continue and expand the partnership with such a strategic customer. The outcome of these negotiations is a consequence of our commitment to consistently deliver operational excellence and continuous improvement for our customers, and it also reinforces our expertise in managing supply chains related to the automotive sector.”

Between 2014 and 2015, Daimler invested around 1 billion Brazilian real ($320m) in its commercial vehicle plants in Brazil. The company also has a plant in São Bernardo do Campo, which makes trucks, bus chassis and other parts such as engines, transmissions, axles and truck cabs.