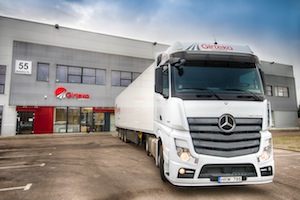 Mercedes-Benz Trucks has reported its largest-ever fleet order in Eastern Europe. The deal will see it deliver 1,000 Actros trucks to the Lithuanian logistics provider, Girteka Logistics. The value of the deal is undisclosed.

Girteka provides services for a range of sectors, including automotive, in Europe, Russia and the Commonwealth of Independent States (CIS). Since 2012 it has been a logistics partner for Mercedes-Benz, transporting spare parts in Europe.

Mercedes-Benz will supply the trucks, which come with Euro IV engines, from its Wörth plant in Germany. Supply of the trucks to Girteka Logistics has already begun and the majority of them will be handed over within the current year said the truckmaker. A spokesperson for Daimler’s Commercial Vehicle business said that Girteka will pick up the trucks from the Wörth plant during the course of the year on their own axle but that there is also the potential for delivery to Lithuania by flatbed truck (using ‘jockey’ transport).

This year is Girteka’s 20th anniversary and it is marking the occasion with a modernisation of its fleet. In all the company operates 2,900 trucks and 3,100 trailers.

“We are proud to win Girteka Logistics as a large customer with the biggest fleet order in Eastern Europe for Mercedes-Benz Trucks in its history,” said Stefan Buchner, head of Mercedes-Benz Trucks. “We feel very honoured by this trust, and it clearly shows that our flagship model Actros stays ahead of the tough competition.”

According to the truckmaker the average fuel consumption of the Actros has been cut by 13% since its market launch in 2011.