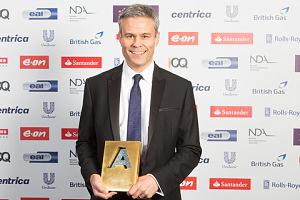 Mercedes-Benz UK has been recognised as the Large Employer of the Year at the National Apprenticeship Awards in London.

The awards, now in their 13th year, took place on January 20th and recognise businesses that grow their own talent via apprenticeships. Apprentices who have made significant contributions in their workplaces are also recognised.

Mercedes-Benz UK has both intermediate and advanced apprenticeships through the 180 franchised partners and independent specialists in the country. There are over 500 apprentices currently on the programme.

Andrew Mallery (pictured), training operations director at Mercedes-Benz UK, said: “We see apprenticeships as a route to tap into the talents of young people in order to support succession planning and growth aspirations.”

He added that almost two-thirds of the company’s apprentices were still with the business a decade later and that 91% had been promoted or had gone on to gain additional qualifications, supported by the business.

“We made the decision to recruit apprentices as a way to combat our ageing workforce and have since grown our apprentice intake by 98% in the last four years,” he said.

There are six employer award categories ranging from small to macro, and two newcomer categories.