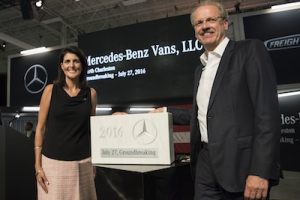 Mercedes-Benz Vans is to end supply of semi-knockdown (SKD) Sprinter van kits to the US from Germany and set up a new $500m plant in North Charleston, South Carolina before the end of the decade. The company said production of the van in the US would offer a “faster and more individualised supply to its customers”, considerably reducing delivery time to market.

Work on the new plant began last week with a ground-breaking ceremony attended by the governor of South Carolina, Nikki Haley, and the head of Mercedes-Benz Vans, Volker Mornhinweg.

Mercedes-Benz already has a plant in North Charleston assembling Sprinter models from imported SKDs. The kits are made at its German plants in Düsseldorf and Ludwigsfelde. The vehicle maker has been importing SKDs since 2006 for the larger Sprinter models and added SKDs of the Metris (Vito) mid-sized van last year.

SKDs attract an import tariff of just 3.4%, compared to 25% of the sales value of the vehicle for finished vans. Chassis weighing more than 11,000lbs (4,990kg) and minibus variants are not subject to the 25% US ‘Chicken Tax’ and are imported directly.

Despite the import tariff advantage, however, the use of SKD assembly has resulted in a significant competitive disadvantage on the US market, said Mercedes-Benz, as vehicles made domestically don’t incur any import tariffs or international transport costs. In addition, there is a long delivery time on Sprinter SKD imports from Germany to the US – anything up to six months, according to the company.

A spokesperson for Daimler said that with the new plant, Mercedes-Benz Vans would be closer to its customers’ needs.

Faster, more economic delivery to market is important to Mercedes-Benz because the US is one of the fastest growing van markets in the world and is set to become the second-largest single market for the Sprinter after Germany. Mercedes-Benz Vans reported delivery of around 28,600 vans to US customers last year – 11% more than the 25,800 it delivered in 2014.

In terms of local content, Mercedes-Benz said its integration partners for the new plant – Auto Truck Group and the Knapheide Manfuacturing Company – would establish production sites in the region.

“We will have a mix of on-site, just-in-time and ship-in supply,” said Daimler’s spokesperson. “We have Mercedes-Benz Vans and Daimler internal [and] external suppliers worldwide. The most important criterion is always economic efficiency. We will continuously increase the grade of localisation in our factory in Charleston over the years.”