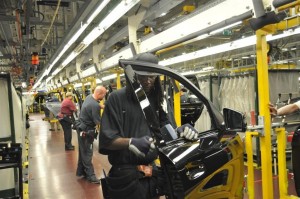 Mercedes-Benz USA is expanding its fuel cell-powered forklift truck fleet at the Tuscaloosa plant in Alabama with the purchase of 123 GenDrive hydrogen-based fuel cell units supplied by technology provider Plug Power. The units will power forklift trucks at a logistics hub under construction in Tuscaloosa next to the carmaker’s manufacturing plant there.

Construction began on the new $70m, 84,000 square-metre logistics centre at the plant at the beginning of the year. It is anticipated that the logistics centre will be as large as the current assembly plant and will receive about 240 semi-trailer truck deliveries daily.

The forklifts powered by the cells are expected to handle approximately 2.9 million automotive parts per day.

The latest purchase follows Mercedes purchase of 72 GenDrive fuel cells in July, also to support production at Tuscaloosa, which makes the M-Class and GL-Class SUVs as well as R-Class crossover models.

The hydrogen-based GenDrive fuel cell has been designed as a replacement for lead-acid batteries. The cells provide a cleaner source of energy for warehouse and distribution operations, and remove the need for battery storage and re-charging rooms according to Plug Power.

The newly-purchased units are reported to take minutes to refuel and will keep the forklift trucks running at constant speed. Fuel cell usage also eliminates the danger of lead and acid contamination in the workplace.

The CEO of Plug Power, Andy Marsh, said that “the Mercedes-Benz plant in Tuscaloosa has experienced first-hand the value of GenDrive fuel cells to operate its forklift fleet.” He cited the success of the units’ initial implementation had led Mercedes “to broaden their commitment to sustainable energy by ordering even more GenDrive units to power the fleet in their new logistics centre.”