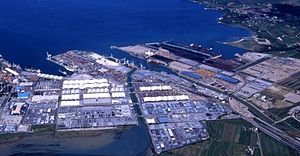 [UPDATED 11 February] Mercedes-Benz has been forced to reroute Asia-bound European exports from the Slovenian port of Koper to Germany’s Bremerhaven port, because of widespread disruption on the Slovenian rail network, which is run by the state-owned company, Slovenske Zeleznice.

The disruption includes closures to the one-track line between Divaca to Koper, which is used by Slovenian freight forwarder, Intereuropa, to move Mercedes-Benz volumes to the port. Backlogs and delays forced the carmaker to move 738 cars to Bremerhaven from its Kecskemét plant in Hungary. The problem comes just three months after Daimler started exporting Mercedes-Benz vehicles from the port with the operator, Luka Koper.

A spokesperson for Daimler confirmed that the carmaker had re-routed a certain volume of vehicles from Kecskemét destined for Koper to Bremerhaven by rail. "This action became necessary due to track work on the rail route between Kecskemet and Koper via Villach," he said.

That was backed up by Luka Koper, which also confirmed that upheaval to the rail infrastructure was behind the redirection of volumes.

“The Slovenian railway system was facing some congestion in previous weeks due to unforeseen works on the tracks in Slovenia and Austria,” the spokesperson told Automotive Logistics. “That caused some delays. That’s the main reason Daimler decided to reroute 738 vehicles to the north from their plant in Hungary.”

He added that this had not affected the existing contract between Luka Koper and Daimler. The carmaker announced in June last year that it was moving vehicles from the port, including those made at Kecskemét, which include the B-Class, CLA-Class and, since last year, the CLA Shooting Brake.

BLG Logistics confirmed that it handled the re-routed consignment of Mercedes-Benz vehicles on arrival at Bremerhaven, stating that it was “always prepared to support our customers in case innovative logistics routes are not working”.

Delays in SloveniaRail delays have been increasing in Slovenia. In January the state-owned rail provider, Slovenske Zeleznice, reported “many major delays” to freight trains using the network.

“SZ-Tovorni promet and SZ-Infrastruktura are, together with other companies of the Slovenian railways group, doing their best to decrease the delays as much as possible and to normalise the running of the freight trains,” the rail provider said in a statement.

More specifically, there have been three 48-hour closures in the space of three weeks on the one-track line from Divaca to Koper. According to a letter sent to companies using the network, the director of SZ-Tovorni promet, Melita Rozman Dacar, said that there was also renewal of tracks at Koper’s freight station and daily closures on the Pragersko-Hodos line. Dacar said there was also backlogged cargo because of closures on both border crossings with Austria. Taken together with an increase in cargo flow at the end of last year there were now, “major problems in providing a high quality of services”.

“[W]e are doing our very best to provide you with quality services, which in the present situation is extremely difficult, as the infrastructure capacities are not sufficient for all backlogged and current transports,” read the letter from Dacar. “SZ-Infrastruktura is investing all their efforts in creating conditions for the smooth operation of all carriers.”

Luka Koper is reported to have sent a letter of complaint to Slovenske Zeleznice, as well as to the government.