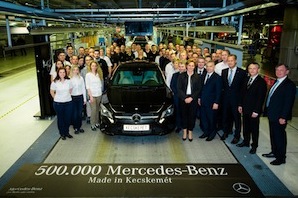 Daimler’s Mercedes-Benz plant in Kecskemét, Hungary has reached the production milestone of making its 500,000th vehicle – a cosmos black CLA. At the same time, the company has begun work on a €15m ($16.7m) investment to expand its logistics hall at the plant and introduce a new supply concept. The plant makes the Mercedes-Benz B-Class, CLA and CLA Shooting Brake.

"The production anniversary is a success achieved together by our workforce of over 4,000 people,” said Christian Wolff, who has been CEO and site manager of Mercedes-Benz Manufacturing Hungary since the beginning of this year. "The Mercedes-Benz plant Kecskemét continues to have a very good perspective with its successful products. We are planning to further develop the location on a continuous basis. Currently, €15m are invested in an innovative logistic concept."

That concept includes a shopping cart-based logistics system that the carmaker said has brought about visible changes in the plant's assembly section. There are now no shelves filled with boxes and parts to be seen anywhere on the production line.

In a statement the company said that the logistics supply processes have changed “almost beyond recognition”. The previous transport routes have been freed up and driverless transport systems take the shopping carts from the picking zone in the logistics centre to the assembly line automatically. From there employees remove the parts from the shopping cart at the relevant workstations and install them in the vehicles. The new system means that the load carriers previously used in the production area are no longer necessary. Construction work on the expansion of the logistics hall started earlier this year and that is expected to be complete by the summer.

The Kecskemét plant continues to work with five inbound logistics providers that handle the different functions: incoming supplies by train or truck; processing empty containers; sequencing parts; and shipping finished vehicles. Those providers have not changed since 2013 and comprise Duvenbeck, Kühne+Nagel, Panopa, Lagermax and Rhenus Logistics.

Daimler has already invested around €1 billion in the Kecskemét plant, including €800m on its construction.