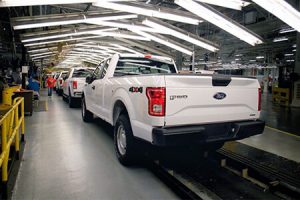 [UPDATED] A fire last week at the Meridian Lightweight Technologies plant in Michigan has led to parts shortages at a number of carmakers’ plants in the US.

The fire, followed by a number of explosions, ripped through the northern part of the Meridian plant in Eaton Rapids, which makes instrument panel components, early on Wednesday last week (May 2). The cause of the blaze is still under investigation.

A number of carmakers have since reported taking action to cope with parts shortages. They include Ford, which told Automotive Logistics that production at its Kansas City plant, in Missouri, which makes the popular F-150 model, would be stopped from May 7-14.

“Kansas City Assembly Plant is down this week due to a part shortage caused by a fire at a supplier facility,” the company confirmed in a statement on Tuesday (May 8). “We are working closely with the supplier to manage the situation and to determine next steps.”

The company would not confirm which parts Meridian supplied to its plant or what steps were being taken to source them from elsewhere. Having initially stated that it was only the Kansas City plant that was affected, the company has since been forced to also stop assembly of the F-150 at its Dearborn truck plant. It added this week that Ford F-Series Super Duty production would be down at its Kentucky Truck Plant in Louisville but that production of that model would continue at the Ohio assembly plant in Avon Lake.

“This is a fluid situation, but we are working closely with our supplier partners to do everything we can to limit the impact on our production,” said Joe Hinrichs, executive vice president and president, Global Operations. “It’s a full team effort and we’re confident that any impacts will be short term.”

BMW and FCA are also reported to be adjusting production schedules this week.

GM, by contrast, said it had experienced no disruption to its Delta Township or Grand River plants. “At this point, there has been no immediate impact to our operations,” confirmed a spokesperson for the carmaker. “Our global supply chain team continues to monitor the situation.”

Local news source, the Lansing State Journal, reported that 150 workers were evacuated after the Meridian incident, with two people hospitalised for minor injuries. It said the fire was thought to have originated in an area of the plant called the ‘tunnel,’ where workers put magnesium scraps on a conveyor belt to be melted down.