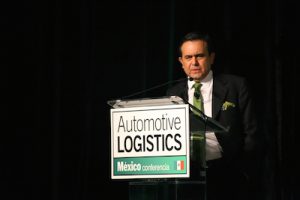 At the opening of the inaugural Automotive Logistics Mexico conference, which took place last week in Mexico City, the Secretary of Economy, Ildefonso Guajardo (left), highlighted the importance of global trade agreements and improvements in the movement of goods across the country’s borders for the continued success of the automotive sector in the country.

That success so far is well documented. With production numbers exceeding 3.22m, Mexico is now number seven in the world in terms of vehicle production and the fourth largest exporter. It has already secured investment of $20 billion in its automotive industry, which will secure 60,000 jobs between 2013 and 2018. It has been part of NAFTA for 20 years, which together with some dozen other agreements covering 45 countries have given it access to 1 billion consumers. However, Guajardo was keen to stress that recent talks with the Obama government were focused on improving trade and making the flow of goods easier. Discussions have focused on transaction costs and border crossings, including how customs works at the borders, as well as establishing a harmonisation of rules and standards, rather than on a 'Nafta 2.0' that would lead to even further economic integration.

“The agenda for negotiations with the US has been concentrated heavily on how we can make life easier for guys who are producing things together [because] the more costly it is for you to get across the border, the less effective production becomes and the less competitive the continent becomes,” he said.

However, while 70% of its vehicle exports currently go to the US, Mexico’s future is by no means solely reliant on that and a number of other trade agreements are in the pipeline. While the proposed trade agreement between the US and European Union continues to move slowly forward under the weight of its own complexity, Mexico is working on its own bilateral agreement, which is expected to be complete in 2016.

Moreover, Guajardo pointed out that, while many are frustrated in the lack of progress being made over the US-EU deal, it would be detrimental to both US and European automotive companies establishing themselves in Mexico were the deal to go through with restrictions.

“At the end of the day a lot of European companies are investing in Mexico and if the agreement between the EU and US was restricted it would be a shot in the foot for many American and European companies that are already placed in Mexico,” said Guajardo. “It would make no sense if the restrictions in that agreement became a block on our ability to build our productive capacity together.”

Mexico is now working to overcome the final obstacles in its trade agreement with the European Union and is aiming to finalise it by 2016 because, as the Secretary said, “there is a strong requirement to advance our relationship with Europe.”

Guajardo also pointed out that Mexico is now working hard on agreements with the Asian markets, having previously only dealt with Japan. As successful as that bilateral agreement was in terms of fast growing investment in the Mexican automotive industry (among others), Guajardo said that it was limited given the potential of the wider Asian markets. Mexico is now working on expanding to make the most of this neglected potential through the Trans-Pacific Partnership (TPP), which it hopes to see finalised in the next six months. The TPP includes 12 countries in Asia and North America.

“We cannot disregard the relevance of the continent that has been growing at a rate of between 6-10%,” said Guajardo. “We must understand the dynamics of this region, especially when you see the growth rates of the last few years in Asia. Mexico cannot be left out of that equation.”

Guajardo also said that there is going to be a radical change in the way it associates with China.

“We have had a terrible policy with the way we have associated with China,” he admitted. "But look at what happened with the US: China became basically the second largest player in the US economy. They displaced Mexico in terms of many exports. With a force of that size, you cannot have the luxury of not designing policy on how you relate to China.”

Mexico’s free trade policy is somewhat different to Brazil, which in recent years looked to protect its local market (which is several times larger than Mexico’s domestic sales), even as Mexico opened up further. Among the measures taken by Brazil was to impose quotas on Mexican imports. But that agreement is set to expire in March, and Guajardo expressed hope that Mexico would be able to move back towards free trade again with Brazil.

Mexico has also been looking to expand trade with other Latin American countries. Guajardo pointed to the recent Pacific Alliance that Mexico signed with Peru, Chile and Columbia. “You might think that those countries are small, but they are our fastest growing for textiles and for heavy trucks,” said Guajardo.

With the country expected to hit 3.5m units of production this year, with exports accounting for nearly 3m, better trade agreements like these are essential, especially if the country is to realise its goal of producing 5m vehicles by 2020. Better trade agreements are also essential in attracting the further investment needed to support increased vehicle production with infrastructure and port developments as part of public-private partnerships. Mexico is currently working on simplifying the law governing PPP agreements, according to Guajardo.