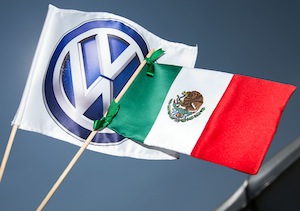 Mexico’s Federal Attorney for Environmental Protection (Profepa) has slapped VW Group with a fine of 168m pesos ($8.9m) for importing vehicles to the country without the proper environmental certificates governing carbon emissions and noise.

The fine applied to almost 45,500 vehicles, including those of the Audi, Bentley, Porsche, Seat and VW brands, and followed an inspection visit by Profepa made on 10th December last year. The vehicles involved were imported by VW Mexico.

The NOM Environmental Compliance Certificates establish maximum permissible emission limits and noise levels. In terms of carbon emissions, NOM-042-SEMARNAT-2003 limits total hydrocarbons or non-methane, CO2, NOx and particulates from the exhaust of vehicles with gross weight not exceeding 3,857kg. It applies to vehicles using petrol, LPG, natural gas and diesel, as well as covering hydrocarbon evaporative emissions from the fuel systems of such vehicles. NOM-079-SEMARNAT-1994 establishes the maximum noise emission from vehicles.

Profepa is continuing to investigate VW’s diesel emissions fraud to determine whether vehicles distributed in Mexico between 2009 and 2015 were fitted with the use of undeclared or unauthorized software.