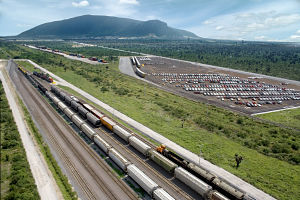 It has been revealed that the Mexican government has been deploying troops since the autumn at various troubled areas in response to rising vandalism and theft targeting both railway lines and automotive cargo.

“The Mexican military is providing some short-term protection to the automotive industry in the state of Guanajuato,” a spokesperson from the Kansas City Southern Railway Company (KCS) confirmed to Automotive Logistics, without providing further detail.

Fellow railway company Ferromex has yet to respond to a request for comment.

Multiple sources suggest as many as 1,000 troops have been deployed at various hotspots in the country, including in Guanajuato and other parts of the central Bajío region.

In December 2015, the El Economista website reported that thieves were boarding trains carrying finished vehicles that had stopped, or slowed down on a stretch of track between Irapuato and Celaya and were stealing tyres, batteries and other parts.

The website cited Mazda Manufacturing Mexico chief executive, Keishi Egawa, admitting that the thefts began when the company initiated operations at its new plant in 2014 in Salamanca and were occurring about twice a week, targeting parts from Mazda and other finished vehicles.

“Damage is increasing, particularly in the north-west of the country,” said GM’s Alfonso Rodriguez, manager of operations for North America and intercontinental vehicle logistics, earlier this year at the FVL Import Export North America summit in Baltimore.

“We do consider those damage rates when making decisions between using rail and short-sea,” he added.

The issue of damage and vandalism to vehicles became so prominent that carmakers’ chief executives recently sent a letter requesting help to the country’s president, Enrique Peña Nieto.

“The result has been phenomenal, with a dramatic reduction in incidents,” said Chuck Kendig, assistant vice-president of production, sales planning and logistics at American Honda.

“Even though recently helped by the presence of federal troops, it’s hard to overstate the level of commitment FXE has shown to this cause – just remarkable,” he commented.

One of the hotspots is Celaya, where Honda has a major car plant. Celaya is the site of an interchange between KCSM and FXE, where trains have to slow down considerably being close to the centre of the city, providing a good opportunity for those intent on theft and vandalism.

A bypass route which would allow Mexico’s FXE and KSCM to bypass the city is years overdue and has run out of funding. It was supposed to be finished in 2013, before Honda’s plant opened. But land disputes and funding issues, including a reduction in the federal budget, have delayed its completion. The Mexican transport ministry has said the project is a priority, however, that that it wants to finish it by the end of 2017.

“While not privy to these negotiations, we’re certain that all parties are establishing the frameworks which will allow the completion of the Celaya bypass and dual access to the Honda plant by the end of 2017,” commented Kendig.

With the Mexican government engaged and work set to restart on interchanges, Kendig is hopeful the rail situation will improve. “We see light at the end of the tunnel,” he said.

High damage rates along certain routes in Mexico have previously prompted Audi in Mexico to consider alternative routes and transport modes, such as short-sea from the west coast. As well as exports to Asia, Audi would also like to start using Lázaro Cárdenas to export vehicles to the west coast of the US and Canada, destinations that are currently served almost entirely by rail from Mexico.

“This is something that I believe we need to have a look into and we are in discussions with Volkswagen de Mexico together with group logistics in Germany,” Audi Mexico’s head of logistics, Peter Koltai, told Automotive Logistics earlier this year. “I believe it could help us with capacity issues or vandalism on trains bound for the US via central and northern Mexico.”

With additional reporting by Christopher Ludwig

Railway capacity and security will be among the topics discussed in the upcoming Automotive Logistics Mexico 2017 conference, which will be held in Mexico City January 31st - February 2nd. Click here for more details.