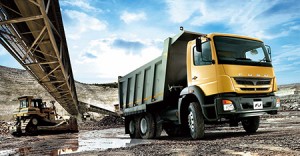 Mitsubishi Fuso Truck and Bus Corporation (MFTBC) has launched a new range of five light-medium and medium-heavy trucks for the Asian and African markets from its production facility in India.

The FA/FI and FJ trucks, which are already sold in the Bangladesh republic, will be exported and sold through MFTBC’s global network in Asia and Africa. The company, which is majority owned by Daimler, is assembling the trucks at the Daimler India Commercial Vehicles (DICV) plant in Oragadam. A spokesperson for the company said that the latest exports from DICV have been developed to augment the existing Fuso portfolio in Asia and Africa in response to demand and to build on the brand’s established reputation. The company would not disclose with which logistics partners it was working.

In 2013, MFTBC sold a total of about 172,400 vehicles including light-, medium- and heavy-duty trucks and buses. Fuso truck sales in Africa doubled during the first two months of this year to 1,060 units from 580 units in the same period of 2013. These sales were based on finished vehicle exports from Japan and India based on a Daimler strategy that combined MFTBC in Japan and DICV based in Chennai. A spokesperson for the company said that it was aiming for global sales in 2020 of 290,000 vehicles.